Colonial and Historic Homes of Maryland. In Two Volumes 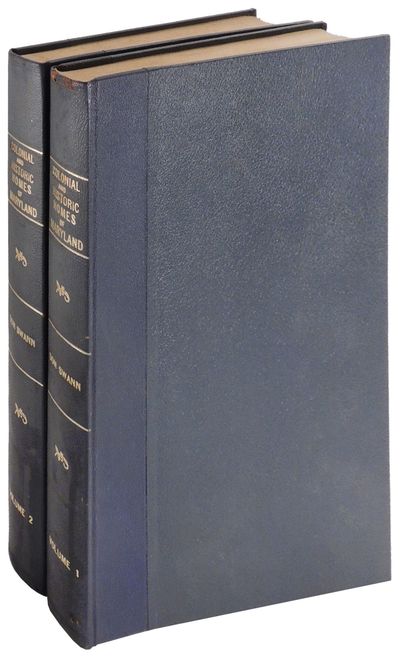 Don Swann Sr. (1889 - 1954) grew up in Baltimore, attending Maryland Institute College of Art, and is known for his etchings of colonial and Neo-classical American architecture. In addition to houses he also did multiple etchings of Baltimore cityscapes. His son Don Swann Jr. (1911 - 1998) followed in his father's footsteps to become a master etcher. He continued to operate the Etchcrafters Art Guild after the death of his father.

Both volumes are bound in blue leather over blue leatherette boards with gilt titles to spines. Minor scuffing to both spines and light stain to spine of second volume. Minor foxing to interiors (heaviest on tissue guards) and browning to endpapers. All etchings have the original tissue guards bound in. Bound by the Elliott Bookbinding Company in Baltimore. Printed on Rives, Woven, Imported paper with Old Style Caslon type at the Monumental Printing Company in Baltimore with typography by Norman T.A. Munder. Continously paginated - 425 pages. Size: Folio. MD/122121. (Inventory #: 35481)
$2,000.00 add to cart or Buy Direct from
Kelmscott Bookshop
Share this item