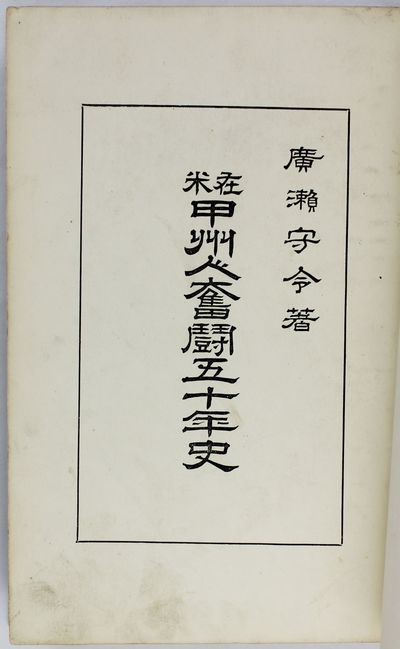 by [Japanese Americana]. Hirose, Shurei
[Los Angeles]: Nanka Yamanashi Kaigai Kyokai, 1934. Very good.. [2],2,2,14,557,[1]pp., profusely illustrated with portraits and other photographs in the text, plus nineteen photographic plates. Original quarter black cloth and textured green and black cloth, gilt spine titles. Moderate edge wear, boards a bit rubbed. Consistent dust-soiling and light foxing to text, short expert repair to final leaf. Originally issued in a printed slipcase, not present here. A rare history of the experiences of Japanese Americans hailing from the Koshu region in the Yamanashi Prefecture of Japan, with much on their experiences on the West Coast of the United States. According to the 1940 census, the author, Shurei Hirose was an Issei born in Japan in 1868; at the time of the census, he was living with his wife and two sons in Los Angeles. Internment camp records indicate he was sent to Poston in Arizona from May 1942 to late-September 1945; as such, he exited Poston Relocation Center at age 77. He died three years later in L.A. The present work is, apparently, the only work Hirose produced.

"A work on the Japanese from Yamanashi Prefecture, especially in California. Presents a history of the Japanese from this Prefecture, including their contributions to Japanese language newspapers, financial institutions, the laundry business; five biographical sketches of leading pioneers; and an outline of the Yamanashi Prefectural Associations of Northern and Southern California. Concludes with an address directory and a Who's Who in America and Canada" - Ichioka.

"Provides a history of Yamanashi people in the U.S., as well as a general introduction of Japanese immigration into the U.S. and Canada. The latter part contains a list of people and profiles of selected individuals" - JANM.

The photographic plates feature several scenes in Japan, plus views in America, such as the facade of the L.A. Japanese Daily News and other businesses, scenes inside Japanese American stores, and group photographs (presumably of schools and companies). The in-text photographs are largely portraits of prominent Japanese Americans and their families. The directory is the only portion of the text printed in both Japanese and English, and lists people in California, Washington, Colorado, Utah, Illinois, New York, and British Columbia.

OCLC reports just four copies in California, one in Illinois, and one in Japan.