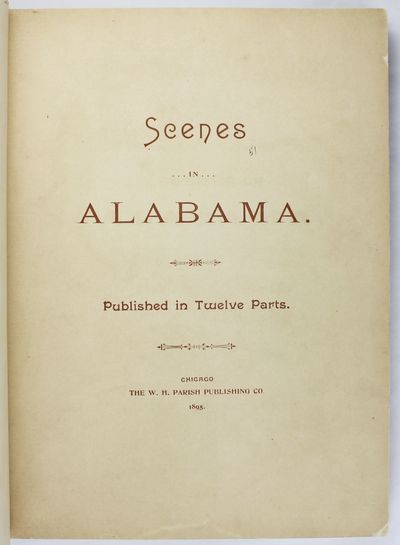 by [Alabama Photographica]. [Clark, Thomas Harvey]
Chicago: The W.H. Parish Publishing Co, 1895. Good plus.. Title leaf, twenty-one text leaves (one illustrated with a photograph), plus seventy-one photographic plates (all called-for), most full-page but some with two photographs per sheet, and the wrappers to Part 12 bound in at rear. Folio. 20th-century green buckram. Ex-library, with stamps or call numbers removed from a few leaves and the rear pastedown, call number still present on retained wrapper for Part 12. The cover title of this work reads Art Work of Scenes in Alabama, and was issued as part of a monumental series of photographic surveys published by W.H. Parish featuring a vast number of American cities across the United States. The present volume pictures dozens of notable sites across the state of Alabama in the last decade of the 19th century through finely-produced photographs and an accompanying text written by Thomas H. Clark, an Alabama historian who worked as a librarian for the United States Supreme Court. Notable Alabama locations pictured here include the University of Alabama in Tuscaloosa, the Institute for the Blind in Talladega, Painted Rock on the Tennessee River, the Capitol Building in Montgomery, Jefferson Davis's house, and the Agricultural and Mechanical College in Auburn (now Auburn University). There are also numerous elevated town views of places such as Woodalls Hill, Decatur, Gadsden, and the business district of Opelika. There are also numerous shots of river scenes, churches, banks, mills, factories, street views, schools (including A.C.F. College in Tuskegee but not the Tuskegee Normal School, i.e. Tuskegee University), and much more.

"The illustrations are beautiful and well executed. The text, prepared by Thomas H. Clark, is general in its character" - Owen.