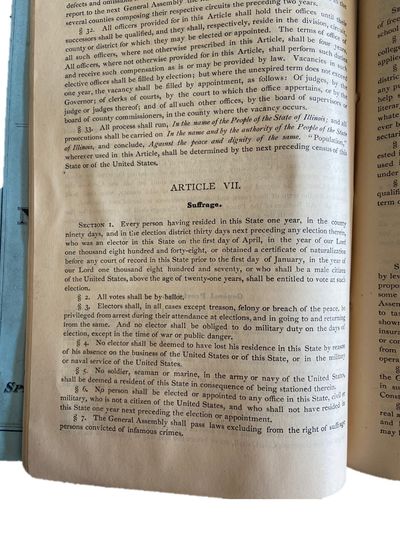 by African-Americana, Suffrage
New Constitution for the State of Illinois. Presented by Hawley & Grant... Springfield, IL: Hawley & Grant, [1870]. Octavo, approximately 5.5" x 8.5" inches. Printed blue wrappers. 32 pages. Rare. By the outbreak of the Civil War in 1861, it was clear that the Illinois constitution of 1848 had been written for totally different times and that the government could not operate for a month without violating it. The 1848 State Constitution was not equipped for the unforeseen changes in transportation, immigration, population growth, and industrialization, not to mention the hotly debated topic of suffrage. At the time, African American rights in Illinois were a fierce point of contention. Illinois was one of seven Midwestern states that denied the vote to African American residents, and though Illinois had been admitted to the Union as a free state, if a free black person was unable to present proof of their freedom they could be sold by the sheriff to the highest bidder. It was clear the state needed to be turned into a more rational and cohesive unit by way of a new constitution. The extreme partisanship of the Illinois State Convention of 1862, which was held in the midst of the Civil War, was doomed to failure; With the close of the war, however, voters approved another call for a constitutional convention. Illinois repealed the oppressive "Black Code" laws following the end of the War in 1865, paving the way for a more just future during the 1869 convention. Delegates were chosen in November 1869 and the convention began meeting in December. The convention was evenly split between Democrats and Republicans, who debated topics ranging from religion, to public education, to organized labor, to industrial regulation, and most importantly, African American suffrage. The convention met for 95 days, and after much discussion, granted voting rights to African American men. Shortly thereafter, Chicagoan John Jones, who had led the fight to remove all state and local restrictions on African Americans, was elected to the Cook County Board of Commissioners in 1871 as the first black man to hold elective office in the state. The 1870 Illinois Constitution also included more detail concerning public education, transportation, revenue and the regulation of businesses and corporations, especially railroads, affirmed the property tax as the chief form of revenue for the state, increased the authority of the governor and curbed the power of the legislature, and reformed the court system. The new constitution met those needs well enough to serve the state for 100 years. Chipping to wrapper edges. Front wrapper separated; back wrapper holding. Binding tight and interior clean. Rare and hard to find. Overall, in good condition. (Inventory #: 17366)
$1,200.00 add to cart or Buy Direct from
Share this item
Max Rambod Inc.
Offered by