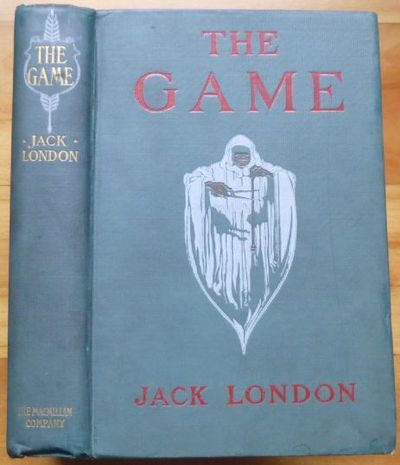 First Edition, which consisted of 26,420 copies. In this prizefighting tale, Joe Fleming tries to convince his fiancée to accept his career by inviting her to watch him box (a precursor to the "Rocky" movies: the fight, blow-by-blow, occupies almost the entire second half of the book). Jack had long cherished a cult of the perfect male body... He had pictures taken of himself in bathing costume, flexing his muscles and shadowboxing. He took snapshots of George Sterling posing on the beach, wearing nothing. Obsessive descriptions of male Anglo-Saxon strength, grace, and sexuality began to creep into his novels, particularly THE GAME, written in the summer of 1904. In that romance of prizefighting, the hero expressed Jack's vanity about his own body -- his skin was fair as a woman's, his face like a Greek cameo, his stance a perfection of line and strength, yet with a deep smooth chest and "muscles under their satin sheaths -- crypts of energy wherein lurked the chemistry of destruction." [Sinclair] This is a handsomely but oddly bound book, with symbols of death and of fate on the binding, on the endpapers, and throughout the text. This copy has, on the copyright page, only the bottom line of the hand-stamped two-line notice -- so we cannot tell which of two variations in type it is (some have two lines 3/32" tall, some copies have it in smaller type, and some have no such notice). This is a near-fine copy with scarcely any wear (very faint cover soil, front endpaper slightly cracked and bearing a hand-stamped "29"). Sisson & Martens p. 24; Blanck 11886. (Inventory #: 14903)
$250.00 add to cart or Buy Direct from
Sumner & Stillman
Share this item