A Book of Cats; Being Twenty Drawings 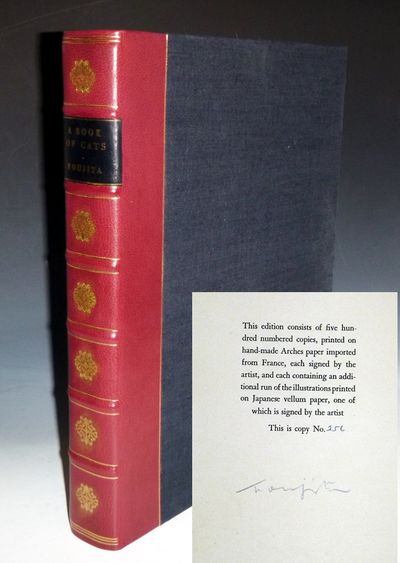 by Joseph, Michael and Tsuguharu Foujita (artist)
Limited to 500 copies signed by the artist and with an extra suite of 20 plates of which one of those plates was also signed by the artist. Half-title, 84(1)pp. illustrated with beautifully rendered illustrations of cats and kittens by the renowned Léonard Tsuguharu Foujita (1886-1958), "the most important Japanese artist working in the West during the 20th century". He was also known for his eccentric personality and lifestyle. Today, his work can be found in numerous public and private collections around the world, including the Art Institute of Chicago, the Museum of Fine Arts, Boston, The Museum of Modern Art in New York, and the Museo Nacional de Bellas Artes in Argentina. His breakthrough, one-man show was held at Chéron's gallery near the Champs-Elysées where all 110 of his works sold on the first day. Among the buyers was Pablo Picasso, who is said to have purchased as many works as he could carry out under his arm. In 2018 (Fine Books & Collectibles Magazine) his work made the top 500 rare books list when it sold in December at Bonhams for $68,750. Before that, Bonhams sold one in June of 2011 for $60,000 and in June of 2012 for $74,500. The book is bound in publisher's red cloth with Foujita stamped in silver, spine lettering silver covers display some soiling, spine a bit faded, internally clean without foxing. The separate 20 plates are housed within a custom cloth chemise, both book and plates are housed within a custom clamshell of 1/4 maroon leather over black cloth, raised bands with compartments ruled and decoratively stamped in gilt, black leather spine label gilt. A very scarce and highly sought after work (Inventory #: 022800)
$55,000.00 add to cart or Buy Direct from
ALCUIN BOOKS, ABAA
Share this item

New York : A. Burdette Smith's World of Fashion , 1876
(click for more details about Little Brown Bessie)
View all from this seller>