The Baronage of Scotland; Containing, an Historical and Genealogical Account of the Gentry of That Kingdom: Collected from the Public Records and Chartularies of This Country; the Records and Private Writings of Families; and the Works of Our Best Historians. Illustrated with Engravings of the Coats of Arms. 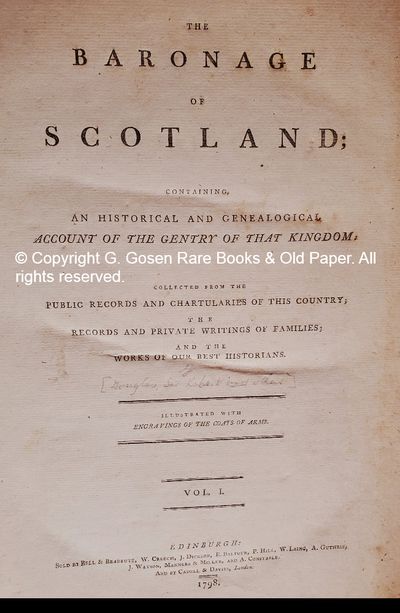 by Douglas, Robert, Sir, Bart.
Douglas, Robert, Sir, Bart.
The Baronage of Scotland; Containing, an Historical and Genealogical Account of the Gentry of That Kingdom: Collected from the Public Records and Chartularies of This Country; the Records and Private Writings of Families; and the Works of Our Best Historians. Illustrated with Engravings of the Coats of Arms. Vol. I. Edinburgh: Sold by Bell & Bradfute, W. Creech, J. Dickson, E. Balfour, P. Hill, W. Laing, A. Guthrie, J. Watson, Manners & Miller, and A. Constable. And by Cadell & Davies, London. 1798. First edition. Volume II was never published. [1 blank; i; xi (verso of xi blank); 623 pages; 1 blank] 44 cm x 25 cm. This copy was never bound, an untrimmed copy still in the original publisher's paper boards. Very good original condition.
While Sir Robert Bart Douglas began this work, it was completed by others after his death. Noting the inception of hereditary estates in Scotland in the mid-eleventh century, Douglas delineates between "lesser" and "greater" Barons. The purpose of this work was to delineate the genealogies of the Baronets and trace the ancestry, pedigrees, intermarriages, employments, public accomplishments; and, Coats of Arms, Armorial Bearings and Family Residences. (Inventory #: 460)
$750.00 add to cart Available from
Gosen Rare Books
Share this item

The Comic History of Rome.

London : London, Bradbury & Evans,11 Bouverie Street , [1850]
(click for more details about The Comic History of Rome.)
View all from this seller>