The Doctrine of Chances; or, a method for calculating the probabilities of events in play 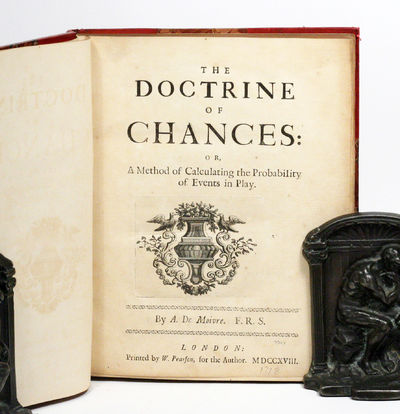 by MOIVRE, ABRAHAM DE
London: William Pearson for the Author, 1718. First edition. nineteenth century morocco. Very Good. FIRST EDITION OF THE FIRST TEXTBOOK ON PROBABILITY THEORY. "De Moivre expanded his paper 'De mensura sortis' (written in 1711), which appeared in Philosophical Transactions, into The Doctrine of Chances (1718). Although the modern theory of probability had begun with the unpublished correspondence (1654) between Blaise Pascal and Pierre de Fermat and the treaties De Ratiociniis in Ludo Aleae (1657; 'On Ratiocination in Dice Games') by Christiaan Huygens of Holland, de Moivre's book greatly advanced probability study. The definition of statistical independence-namely, that the probability of a compound event composed of the intersection of statistically independent events is the product of the probabilities of its components-was first stated in de Moivre's Doctrine. Many problems in dice and other games were included, some of which appeared in the Swiss mathematician Jakob (Jacques) Bernoulli's Ars conjectandi (1713; 'The Conjectural Arts'), which was published before de Moivre's Doctrine but after his 'De mensura.' He derived the principles of probability from the mathematical expectation of events, just the reverse of present-day practice" (Britannica).