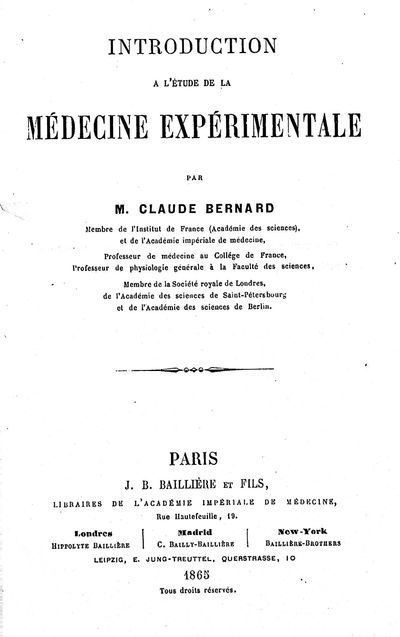 1865 SCARCE FIRST ISSUE OF CLAUDE BERNARD'S INTRODUCTION TO THE STUDY OF EXPERIMENTAL MEDICINE, THE WORK THAT BROUGHT THE SCIENTIFIC METHOD TO CLINICAL RESEARCH--COPY OF NOTED FRENCH SURGEON.

GARRISON-MORTON 1766.501: "Probably the greatest classic on the principles of physiological investigation and of the scientific method as applied to the life sciences." Grolier Club, One Hundred Books Famous in Science.

CLAUDE BERNARD (1813-1878) was a French physiologist. Historian I. Bernard Cohen of Harvard University called Bernard "one of the greatest of all men of science". Among many other accomplishments, he was one of the first to suggest the use of a blinded experiment to ensure the objectivity of scientific observations. He originated the term milieu intérieur, and the associated concept of homeostasis. However, his field of research was initially considered inferior at the time, and the laboratory assigned to him was simply a "regular cellar." Some time previously Bernard had been chosen the first occupant of the newly instituted chair of physiology at the Sorbonne, but no laboratory was provided for his use. It was Louis Napoleon who, after an interview with him in 1864, repaired the deficiency, building a laboratory at the Muséum national d'Histoire naturelle in the Jardin des Plantes. Claude Bernard's aim, as he stated in his own words, was to establish the use of the scientific method in medicine. He dismissed several previous misconceptions, questioned common presumptions, and relied on experimentation. In his major discourse on the scientific method, An Introduction to the Study of Experimental Medicine (offered here), Bernard described what makes a scientific theory good and what makes a scientist important, a true discoverer. Unlike many scientific writers of his time, Bernard wrote about his own experiments and thoughts, and used the first person. The "philosophic spirit", writes Bernard, is always active in its desire for truth. It stimulates a "kind of thirst for the unknown" which ennobles and enlivens science—where, as experimenters, we need "only to stand face to face with nature".

PROVENANCE: SAMUEL-JEAN POZZI (1846-1918) was a French surgeon and gynecologist. In 1864, Pozzi began to study medicine in Paris. When the Franco-Prussian War broke out in 1870, he volunteered and became a medic. Later he was one of the pupils of the neurologist Paul Broca and as his assistant he worked with anthropology, neurology and comparative anatomy. He established the first Chair of Gynecology in Paris in 1884, and in 1896 he was elected to the French Academy of Medicine. Pozzi wrote over 400 papers on surgery. His gynaecology text of 1890 was translated into five languages, and with revisions remained an authority to the 1930s. (Inventory #: 1216)
$900.00 add to cart Available from
BioMed Rare Books
Share this item