Out of the Depths: the Story of a Woman's Life 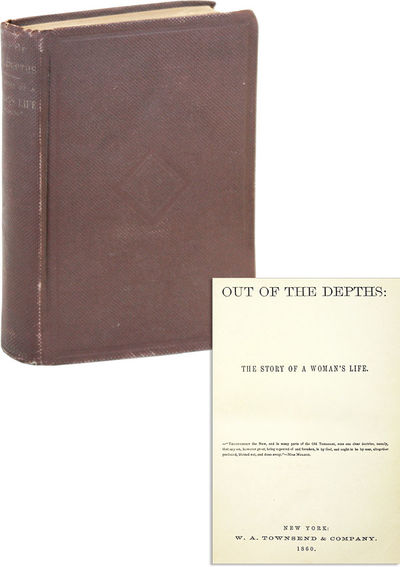 by [WOMENS' HISTORY & LITERATURE] ANON [attrib. Henry Gladwyn Jebb, 1826-1898]
New York: W.A. Townsend & Company, 1860. First American Edition. Small octavo (19cm). Publisher's embossed brown cloth, lettered in gilt on spine; 370pp. Slight aging to cloth, with gilt title faint from oxidation; text mildly age-darkened; Very Good. Highly uncommon American edition of this anonymously-published novel of the Victorian underworld, describing the descent and eventual redemption of a young woman who falls from grace, beginning as a respectable lady's maid, seduced, impregnated and abandoned by an Oxford student, thence by degrees to the depths of depravity: from "mistress of a young lord, to mistress of a rich barrister, to eventually a street-walker in London" (for a full synopsis see At the Circulating Library: a Database of Victorian Fiction, 1837-1901, on-line resource). First published in 1859 in London, and attributed by most sources to Henry Gladwyn Jebb, an Anglican curate. WOLFF 3611, remarking that his was the only copy of the book he had ever seen (OCLC however locates nine copies of the London edition, another nine of this Ameican edition, with various American piracies appearing between 1865 and 1880). (Inventory #: 47716)
$300.00 add to cart or Buy Direct from
Lorne Bair Rare Books
Share this item

Edinburgh and London : William Blackwood and Sons , 1900
(click for more details about Lord Jim [Finley Peter Dunne's copy])
View all from this seller>