116 photographs of Bayocean, Oregon, "The Town That Fell into the Sea 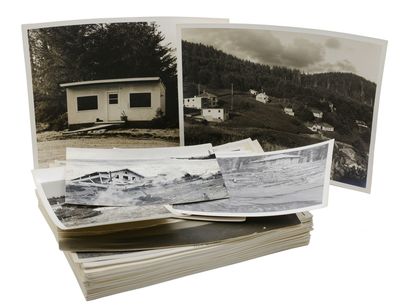 by Stuart, Herschel H.
[no place]: [no publisher], 1961. A collection of 116 vernacular photographs, mostly of the town of Bayocean, Oregon, which was destroyed by coastal erosion. What had been a thriving coastal resort town of 2,000 people (founded in 1906), became a ghost town and then was swallowed up by the sea. Portland photographer Herschel H. Stuart documented this process in these black-and-white photos. 92 of them are 8" x 10", 22 are 7" x 5", two are smaller than that, and there is a commemorative photo postcard of the nearby Bar View Hotel collapsing into the sea. Very Good overall. Many photos are of the beach itself, some showing the debris and cracks forming in nearby roads. A few shots are from the hills above the town and a few are of the photographer, his wife, and friends in different locations. An unusual, slightly unsettling group of beach-themed photos from the mid-twentieth century along a coast that was changing rapidly. (Inventory #: 140942622)
$600.00 add to cart or Buy Direct from
Burnside Rare Books
Share this item
Burnside Rare Books
Offered by

London : George Allen , 1894
(click for more details about Pride and Prejudice)
View all from this seller>