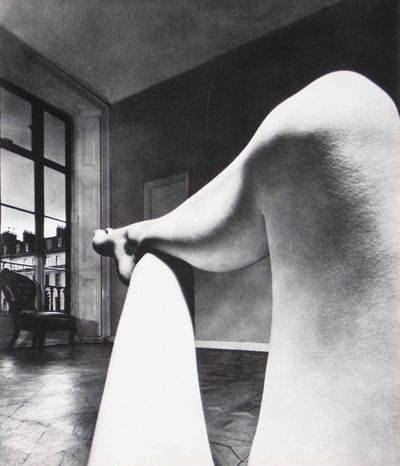 by Brandt, Bill (Photographer); Lawrence Durrell (Preface); Chapman Mortimer (Introduction)
New York: Amphoto, 1961. First edition. Hardcover. g- to very good condition/good +. Quarto. 14pp., (2) 90 plates with six half-titles. Original decorative boards with red lettering on cover and spine, in original photo-illustrated dustjacket, red and black lettering on spine. "Bill Brandt, best known for his photographs of London, his landscapes and portraits of celebrities, publishes here, for the first time, a selection of nudes, a subject which has obsessed him since 1945. Brandt used an old wooden camera with a wide angle lens for most of the pictures. Instead of making the camera register what he saw, he let himself be guided by the lens and made use of its acute distortion and unrealistically steep perspective." (Publisher). The photos are chronologically arranged and separated into six chapters. Boards lightly soiled. Bottom edge of dust jacket a bit soiled, top edge with several chips. Boards with light wear along edges, small closed tear at head of spine. Dustjacket with some chipping along top edge, light at bottom edges and some light soiling here on front cover. (Inventory #: 49550)
$150.00 add to cart or Buy Direct from
Eric Chaim Kline Bookseller
Share this item