A MONOGRAPH OF THE RAMPHASTIDAE, OR FAMILY OF TOUCANS 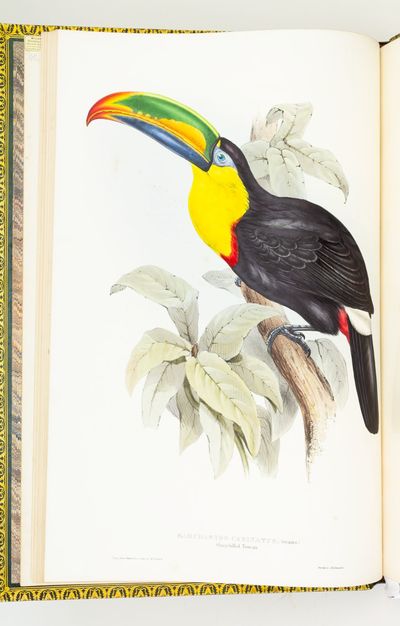 This is a most appealing copy of Gould's first monograph, an exotic and colorful work issued in three parts. It is devoted entirely to the toucan and is described by Sitwell as one of the Gould's "most lovely works." In the Introduction, Gould explains that these birds, found only in the tropical portions of the Americas, "are a retiring and shy race, are mostly observed in small flocks or companies, and inhabit the dense woods and forests of that luxuriant country." There is nothing quiet or shy about the birds' plumage, depicted here in particularly vivid plates by John and Elizabeth Gould and Edward Lear. According to DNB, Gould, a taxidermist by training and trade, "was the collector (especially in Australia) or purchaser of the specimens, the taxonomist, the publisher, the agent, and the distributor of the parts or volumes. He never claimed he was the artist for these plates, but repeatedly wrote of the 'rough sketches' he made from which, with reference to the specimens, his artists painted the finished drawings. The design and natural arrangement of the birds on the plates was due to the genius of John Gould." Thanks to his eye for composition and the talents of his wife and other artists for drawing and color, "a Gould plate has a distinctive beauty and quality."

A previous (and probably the first) owner of this copy was the pioneering pharmacist and politician Jacob Bell (1810-49), who had trained in his father's pharmacy and attended lectures at the King's College, London and at the Royal Institution on physic, anatomy, and chemistry, while also pursuing instruction in art. Realizing the limits of his own artistic talent, he devoted himself to pharmacology for his profession, but became a notable art collector and befriended a number of artists, among them Edwin Landseer and William Frith. A founder of the Royal Pharmaceutical Society of Great Britain, Bell became a Member of Parliament primarily to give his profession a voice in the creation of legislation designed to regulate it. He was also the founder, proprietor, and editor--as well as the financial underwriter--of the "Pharmaceutical Journal," becoming acknowledged as one of the most important figures in the discipline's development during the 19th century. Bell's energy and achievements were typical of his epoch, and so was his philanthropy. When he realized in the late spring of 1859 that he was dying, Bell bequeathed £2,000 to the Pharmaceutical Society and 13 paintings (valued at as much as £20,000) to the nation. Just 10 days before his death, he gave a group of works by Gould (including the present book) to the Royal Institution. While individual plates from this work appear on the market with some regularity, it is uncommon to find all of them together, especially in a contemporary morocco binding and with distinguished provenance.. (Inventory #: Lhi21009)
$98,800.00 add to cart or Buy Direct from
Phillip J. Pirages Fine Books
Share this item

by STATIUS, PUBLIUS PAPINUS. [and OVID.

THE HISTORY OF THE PROVINCE OF NEW-YORK, FROM THE FIRST DISCOVERY TO THE YEAR M.DCC.XXXII. TO WHICH IS ANNEXED, A DESCRIPTION OF THE COUNTRY, WITH A SHORT ACCOUNT OF THE INHABITANTS, THEIR TRADE, RELIGIOUS AND POLITICAL STATE, AND THE CONSTITUTION OF THE COURTS OF JUSTICE OF THAT COLONY "One of the Worthiest Examples of Historical Literature Produced in Later Colonial Times," In Elegantly Decorated Morocco by One of America's Worthiest Binderies

London : Printed for Thomas Wilcox , 1757
(click for more details about THE HISTORY OF THE PROVINCE OF NEW-YORK, FROM THE FIRST DISCOVERY TO THE YEAR M.DCC.XXXII. TO WHICH IS ANNEXED, A DESCRIPTION OF THE COUNTRY, WITH A SHORT ACCOUNT OF THE INHABITANTS, THEIR TRADE, RELIGIOUS AND POLITICAL STATE, AND THE CONSTITUTION OF THE COURTS OF JUSTICE OF THAT COLONY "One of the Worthiest Examples of Historical Literature Produced in Later Colonial Times," In Elegantly Decorated Morocco by One of America's Worthiest Binderies)
View all from this seller>