Moral Heroism; or, The Trials and Triumphs of the Great and Good 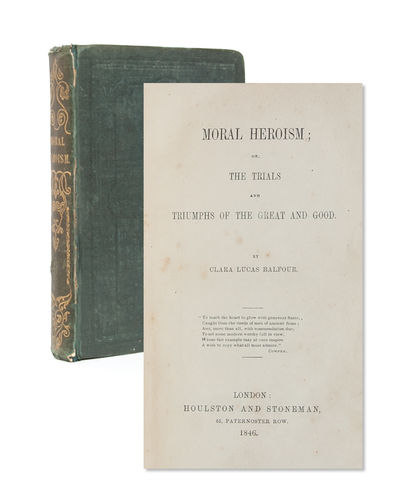 by [Feminist History] Balfour, Clara Lucas
London: Houlston and Stoneman, 1846. First edition. Original publisher's cloth embossed in gilt and blind. Yellow endpapers. Corners gently bumped and rubbed; some chipping to spine ends and splits to cloth along both joints, with binding firm. Later bookplate of J.J. Barker to front pastedown and contemporary gift inscription to front endpaper. Occasional inoffensive marginal foxing and pencil annotations; some edges roughly cut, with no loss to text. Collating complete: iv, 368. An assertively feminist perspective on history and leadership, and the first book by activist Clara Balfour, it is scarce institutionally and in trade. While OCLC reports only two copies, none appear in the modern auction record and there are no other first editions on the market.

An educator, philanthropist, and women's rights campaigner, Clara Lucas Balfour added author to her list of honoraries with the publication of this work. Moral Heroism initiated a career that would include "more than sixty publications, many of which went through multiple editions" and her "biographical works about women give her significance in the development of women's literary history. In writing and lecturing on the achievements of women, particularly writers, she stressed the importance of women's education" (Orlando Project). She also emphasized the failings of patriarchal systems of governance, encouraging all readers to imagine a world that privileged moral heroism over military might and which turned to women as models for a new form of leadership. Opening with a dialogue among a mother and children having recently visited a cathedral, the book shows two young boys intuiting from sculptures and art that heroism and glory are linked to conquering and dominance, and that these are the realms of men. Dissatisfied with their assumptions, the mother sits her sons down to confront the inherent problems of this approach to the world; the questions she raises initiate the remainder of Balfour's book, which was written logically and "with a purpose" (Culley). Chapter by chapter she points to historical and contemporary figures across classes who are taking moral leadership, fostering improvements in the world by alleviating poverty, supporting education, and advancing the sciences. And she considers the contributions of women as exemplars of these efforts in daily life. Ultimately, these are the qualities on which a new system can be based. (Inventory #: 4653)
$1,250.00 add to cart or Buy Direct from
Whitmore Rare Books
Share this item

An Interesting Appendix to Sir William Blackstone's Commentaries on the Laws of England..

Philadelphia : Printed for the Subscribers by Robert Bell , 1773
(click for more details about An Interesting Appendix to Sir William Blackstone's Commentaries on the Laws of England..)

The American Dream: A Transcription of the Commencement Address Delivered by Martin Luther King, Jr. at Lincoln University on June 6, 1961