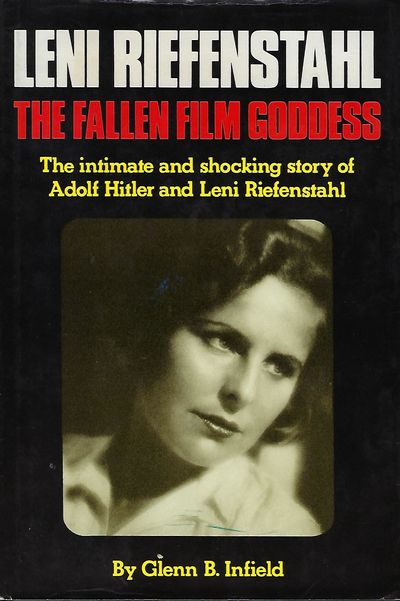 by INFIELD, Glenn B.
NY: Thomas Y. Crowell Company, 1976. First Edition, first printing. Signed presentation from Infield on the title page: "To Frank & Louise with best regards, Glenn B. Infield." Also, with an autograph signature of Riefenstahl on a 3-by 5-inch white card laid in. A unique copy! Helene Bertha Amalie "Leni" Riefenstahl [1902-2003] was a German film director, photographer and actress known for her seminal role in producing Nazi propaganda. In the 1930s, she directed the Nazi propaganda films "Triumph des Willens" ("Triumph of the Will") and "Olympia", resulting in worldwide attention and acclaim. The films are widely considered two of the most effective and technically innovative propaganda films ever made. Her involvement in Triumph des Willens, however, significantly damaged her career and reputation after World War II. Adolf Hitler was in close collaboration with Riefenstahl during the production of at least three important Nazi films, and they formed a friendly relationship. After the war, Riefenstahl was arrested but classified as being a "fellow traveler" or "Nazi sympathizer" only and was not charged with war crimes. Throughout her life, she denied having known about the Holocaust. 8vo., black cloth in dust jacket; 278 pages. Illustrated.. Very Good (covers nice & bright; contents clean & tight); very minor edgewear (faint crease front flap) d/j. (Inventory #: 57626)
$385.00 add to cart or Buy Direct from Antic Hay Books
Share this item
Antic Hay Books
Offered by

THE IMPOSSIBLE TASK: A STORY OF PRESENT DAY BOSTON, AND HOW THROUGH FAITH, COURAGE AND SACRIFICE CAME VICTORY AT LAST

Boston : Suffolk Law School Press , 1926
(click for more details about THE IMPOSSIBLE TASK: A STORY OF PRESENT DAY BOSTON, AND HOW THROUGH FAITH, COURAGE AND SACRIFICE CAME VICTORY AT LAST)

Lowell, Massachusetts : Ithaca Press , 1982
(click for more details about TITANIC INTERLUDE)
View all from this seller>