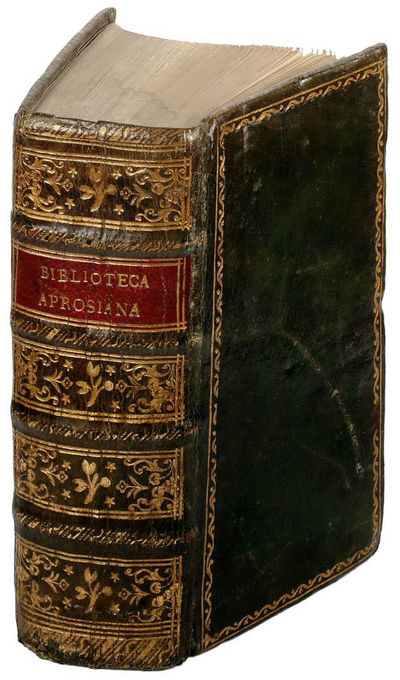 by APROSIO, Angelico (1607-1681)
Two parts in one volume, 12mo (137x69 mm). (10), 733 [i.e. 683], [1 blank] pp. Roman and Italic type. With a frontispiece engraved by Giovanni Mattia Striglioni after Domenico Piola, showing the inside of a library with, on top, the coat-of-arms of Giovanni Niccolò Cavanna, dedicatee of the work and friend of the author. The second part opens with a separate title page on p. 667. At l. C12r half-page woodcut illustration depicting an Egyptian stele. Contemporary green morocco, panels within gilt frame, richly decorated gilt spine with four raised bands and red morocco lettering-piece, marbled endpapers. Reference notes in English by an eighteenth-century hand on the front flyleaves. A fine copy.
RARE FIRST EDITION, financed by the dedicatee Giovanni Niccolò Cavanna and edited by Lorenzo Legati, of the catalogue of the first public library of Liguria, the Aprosiana Library, named after its founder, the Augustinian Friar Angelico Aprosio, and established in 1648 at the Augustinian monastery of Ventimiglia. The library contained over ten thousand volumes (cf. L. Gavazzi, Angelico Aprosio, la Biblioteca Aprosiana e il complesso di Sant'Agostino a Ventimiglia, Ventimiglia, 2010).
The work consists of a list of the collection supporters - the "Fautori" -, arranged in alphabetical order by first name. For each "Fautore", the author gives bio-bibliographical notes and describes the books donated by him to the library. In most cases the donor is also a writer or a scholar who gave to the library works of his own.
The catalogue interrupts at the letter C. The continuation (up to letter M) remained unpublished and is known only in an autograph manuscript that Aprosio prepared for printing, which is today preserved at the University Library in Genoa. The second part of the volume contains the Biblioteca Aprosiana cantata by Pier Francesco Minozzi.
The name of the author is concealed behind the pseudonym of Cornelio Aspasio Antivigilmi, actually Aprosio's anagram including also the name of his hometown, Ventimiglia.
Angelico Aprosio entered the Augustinian order at the age of fifteen. He lived for a while in Genoa and Siena, before moving to Monte San Savino (1632-1634), where he taught philosophy and met the lifelong friend P.F. Minozzi. From there he moved back to Genoa in 1634. From 1637 to 1648 he was in Treviso and Venice, where he made the acquaintance of G. F. Loredan and Pietro Michiel, on whose libertine book Arte degli Amanti he wrote a commentary. Aprosio was also in touch with other learned scholars like L. Mancini, G. Scioppio, and L. Allacci.
In 1647 he was invited by Giuliano Spinola, whose son was a pupil of Aprosio, to go back to Genoa. In 1648 he finally found a house for his already conspicuous library in the monastery of his order in Ventimiglia. In 1653 the library was officially recognized by Pope Innocent X, who issued a ban prohibiting the sale of any of its books, and was open to the public. In the following years, Aprosio dedicated himself to increasing the library, enlarging the monastery to host the volumes, and compiling the library catalogue.
The library was partly dispersed in 1798 upon the arrival of the French troops and with the suppression of the Augustinian order. Part of the volumes ended up in the National Library of Genoa. In his last years Aprosio corresponded with G. Naudé, F. Redi, Gronovius, the cardinal Mazarin, and above all with Antonio Magliabechi. Aprosio died in 1681. La Biblioteca Aprosiana is also the most important source about his life (A. Asor-Rosa, Aprosio, Angelico, in: "Dizionario Biografico degli Italiani", III, 1961, s.v.).
Melzi, I, p. 69; Brunet, I, 325; Peignot, 77. (Inventory #: 145)
$1,000.00 add to cart Available from Govi
Share this item