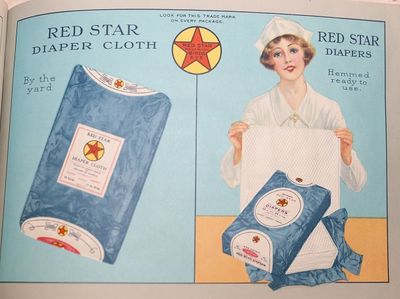 Minneapolis, Minnesota, 1927. Wraps. Fine. A special catalogue of everyday articles because the actual fabric and material of those products is incorporated into the illustrations of them! Also notable is that the catalogue contains a testimonial from Eleanor Roosevelt for Simmons mattresses from a time before FDR became Governor of New York, let alone President of the United States. While Eleanor, who was standing in for her husband during a period he was still adjusting to living with the crippling after-effects of polio, had become well-known in New York State political circles, the relationship with SImmons surely helped increase her visibility nationally. Simmons would later sponsor Eleanor's weekly radio program after she became First Lady. The catalogue is surprisingly scarce as well, with no copies of a catalogue from this company appearing on OCLC. We write "surprising", as Donaldson was a major department store in Minneapolis, founded in 1883 and continuing in business into the late 1980s, when Carson Pirie Scott took over, retired the name, and soon afterward, ended up closing all the Donaldson locations. First Search. Oblong, 15.5 by 23 cm. Unpaginated, 13 leaves, with half of the pages featuring color as background and/or in the illustration, and fabric samples worked into the illustrations. While the department store carried the full range of department store products, this catalogue concentrates on mundane toweling, wash cloths, diapers, sanitary rubber goods, underwear, garters, girdles, bedding and mattresses. Two products presented that might be outliers to this are knit sweaters and swimsuits, both shown on a single page. We particularly like the subtle relief done to represent the metal snaps on hosiery. (Inventory #: 007006)
$750.00 add to cart Available from
White Fox Rare Books & Antiques
Share this item
White Fox Rare Books and Antiques
Offered by