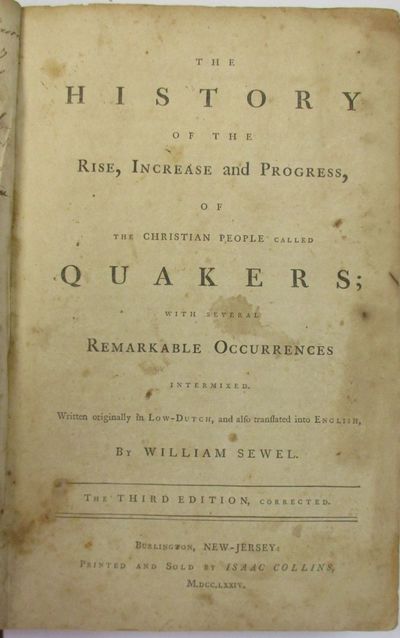 The first American printing of this third edition issued from Benjamin Franklin's Philadelphia press in 1728, Franklin's first book [see, Miller 1], after London printings in 1718, 1722. and 1725. Miller recounts in detail the book's early printing history.
A Dutch historian, Sewel devoted most of his career to the book. Material on William Penn and Pennsylvania is included. DNB described the book as follows: "Its accuracy has never been impugned, and it remains a classical authority." Larned says the History "Possesses great value, not only on account of its freedom from error, but because it was written at an early period in the history of the Society of Friends" [quotation sources eliminated].
Evans 13607. Felcone 238, 239. Larned 3080. (Inventory #: 38137)
$500.00 add to cart or Buy Direct from
David M. Lesser, Fine Antiquarian
Share this item
David M. Lesser, Fine Antiquarian Books LLC
Offered by