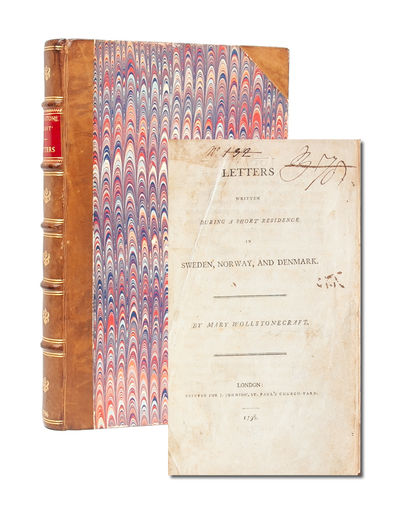 by Wollstonecraft, Mary
London: J. Johnson, 1796. First edition. Bound to style in half calf over marbled boards, with morocco and gilt to spine. Measuring 125 x 205 mm (pages) and collating: [4], 262, [4, appendix and notes], [2, adverts]: complete, including the advertisements listing Wollstonecraft's books, the first known bibliography of her work. Discrete blindstamps to the headers of the first two leaves; contemporary ownership marks to the title page not affecting text. Some creasing and one small closed tear to the fore-edge of the title page; some light foxing to the lower corners of 247-250, and a small, closed tear to the top edge of the Notes leaf. In all, a tight, square copy that is also internally pleasing. Wollstonecraft published Letters only four years after her groundbreaking feminist manifesto Vindication of the Rights of Woman, making hers the first published account in English of a woman travelling for business.

When a Norwegian ship's captain stole valuable cargo from Gilbert Imlay's ship in 1794, the Englishman reached out to his lover, Mary Wollstonecraft, requesting that she travel there as his proxy to obtain compensation. A new mother with a baby in tow, Wollstonecraft nevertheless accepted the charge; and she not only tackled the task set for her by Imlay, she also spent four months traveling to remote destinations, meeting and bargaining with officials, studying local customs, and exploring exotic landscapes. The resulting travel narrative broke new ground at its publication. Wollstonecraft already had become a founder of a feminist movement with her Vindication of the Rights of Woman; and with Letters, the first English-language account of a woman business traveler, she put principles of female independence into action. Her adventurous spirit combined with her command over language "found an enthusiastic public, not least among young poets. The wording of the descriptions of the waterfalls she visited...played a part in inspiring Coleridge's description of the sacred river in Xanadu; and the theme of the book set a fashion for questing, romantic journeys. Byron, Wordsworth, Shelley, and even Mary's as yet unborn daughter all read and followed in Mary Wollstonecraft's footsteps" (Tomalin). A captivating narrative shaped by an unmistakable voice, Mary's husband William Godwin would later proclaim "If there was a book calculated to make a man in love with its author, this appears to me to be the book" (Memoirs). A pleasing copy of an important work, containing the oft-missing publisher's adverts which comprise the first bibliography of Wollstonecraft. (Inventory #: 4746)
$2,250.00 add to cart or Buy Direct from
Whitmore Rare Books
Share this item

An Interesting Appendix to Sir William Blackstone's Commentaries on the Laws of England..

Philadelphia : Printed for the Subscribers by Robert Bell , 1773
(click for more details about An Interesting Appendix to Sir William Blackstone's Commentaries on the Laws of England..)

The American Dream: A Transcription of the Commencement Address Delivered by Martin Luther King, Jr. at Lincoln University on June 6, 1961