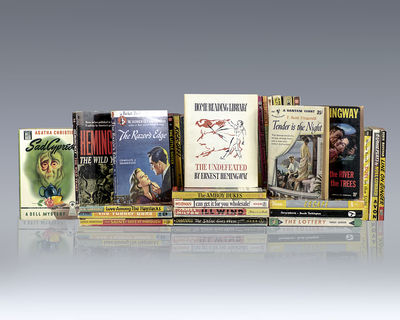 by Bronte, Emily; Agatha Christie; Ernest Hemingway; Jack Kerouac; Rudyard Kipling; John Steinbeck et al
New York: Avon, Bantam, Dell, et al, c. 1940-1960. Large collection of first edition and early printings including a variety of classic literature and pulp fiction. Small octavos, 60 volumes, the collection includes Emily Bronte's Wuthering Heights, Rudyard Kipling's Kim, John Milton's Paradise Lost, Agatha Christie's And Then There Were None, Dashiell Hammett's The Maltese Falcon, Carson McCullers' The Heart is a Lonely Hunter, John Steinbeck's Ernest Hemingway's The Sun Also Rises, Jack Kerouac's The Subterraneans and many others. In very good to fine condition. The early 19th century saw numerous improvements in the printing, publishing and book-distribution processes, with the introduction of steam-powered printing presses, pulp mills, automatic type setting, and a network of railways. These innovations enabled the likes of Simms and McIntyre of Belfast, Routledge & Sons (founded in 1836) and Ward & Lock (founded in 1854) to mass-produce cheap uniform yellowback or paperback editions of existing works, and distribute and sell them across the British Isles. The German publisher Albatross Books revised the 20th-century mass-market paperback format in 1931, but the approach of World War II cut the experiment short. It proved an immediate financial success in the United Kingdom in 1935 when Penguin Books adopted many of Albatross's innovations, including a conspicuous logo and color-coded covers for different genres. In 1939, Robert de Graaf issued a similar line in the United States, partnering with Simon & Schuster to create the Pocket Books label. In the United States, many companies entered the paperback publishing field in the years after Pocket Books' inception, including Ace, Dell, Bantam, Avon and dozens of other smaller publishers. (Inventory #: 121681)
$1,250.00 add to cart or Buy Direct from
Raptis Rare Books
Share this item