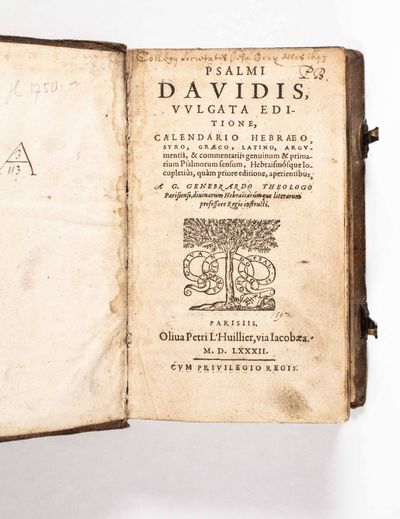 Second known edition, with the editor's copious commentary (which draws significantly from Jewish sources), including a preface to pope Gregory XIII, and an added dedicatory epistle to Jean-Baptiste du Chastel, bishop of Rimini, each dated 1 February 1582. (The prior edition of 1581 contained only the preface to Gregory, dated 1 February 1581.)

Gilbert Génébrard (1537-1591) studied Hebrew under the proselyte Abraham of Lunel (Caesar Braneusius), and was later a pupil of the celebrated Hebraist Jean Mercier in Paris, where he became 'professeur royal' in 1569. Génébrard was an extremely versatile scholar who published many works. His proficiency in Rabbinic Hebrew was motivated in part by the desire to reduce the use of Jewish books by Christian biblical scholars, as he believed that they could be a dangerous influence. He translated the travels of Eldad ha-Dani, the poems of David Ibn Yachya, parts of Maimonides' Guide for the Perplexed and his 'Articles of Faith', and the rabbinical world history Seder Olam. "The scope of his works shows Génébrard as a very broadly oriented Hebraist whose Hebrew literacy was comparable to that of Sebastian Münster" (Hebraica Veritas Catalogue, p.58).

No copies are known of a putative 1577 first edition which was noted in any early listing of Génébrard's works (see Schwarzfuchs). Adams B-1473. Schwarzfuchs, Le Livre hébreu à Paris au xvie siècle, 380. Cf. Smitskamp 611, no. 150 (ed. Plantin, 1592): In the preface to the work, first published in 1577... Genebrardus notably rejects the divine origin of vowel points... and ascribes the to the Masoretes. (Inventory #: 49159)
$500.00 add to cart or Buy Direct from
Eric Chaim Kline Bookseller
Share this item