[SMALL COLLECTION OF DOCUMENTS RELATING TO JAPANESE INTERNMENT, INCLUDING BOTH VERSIONS OF THE LOYALTY QUESTIONNAIRE AND THE "REVISED" QUESTION TWENTY-EIGHT] 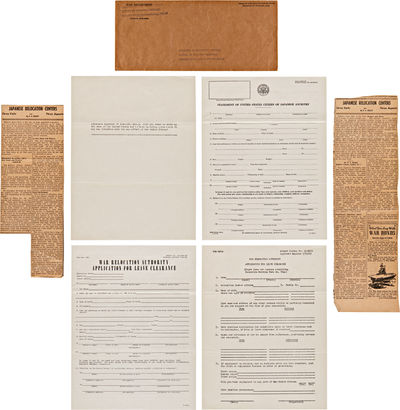 by [Japanese Internment]: War Relocation Authority: Root, F.S.
[Washington D.C.], 1943.. Four War Relocation Authority documents, totaling 10pp., and two newspaper clippings, enclosed in official War Department envelope. Light tanning. All documents near fine. A small collection of some of the most important documents related to Japanese Internment during World War II, including both versions of the Loyalty Questionnaire and its revised question twenty-eight.

The infamous "Loyalty Questionnaire," officially titled STATEMENT OF UNITED STATES CITIZEN OF JAPANESE ANCESTRY, was issued to all incarcerated Nisei (second-generation Japanese Americans) at the start of 1943 and was primarily intended to determine whether or not an individual would be loyal if enlisted in the armed forces. The form consists of twenty-eight questions, including basic information about citizenship, relatives, and employment, but also includes questions about foreign travel, religion, organizational memberships, Japanese language skills, hobbies, bank accounts, and more. "These seemingly innocuous questions were carefully scored according to categories of 'Americanness' and 'Japaneseness' that each response indicated. For example, speaking Japanese well, or belonging to a judo or kendo club would result in negative points, but being Christian, or belonging to the Boy Scouts of America would result in points being added" - DENSHO ENCYCLOPEDIA. The most notorious questions on the form are twenty- six through twenty-eight, which ask if the responder would be willing to nullify his Japanese citizenship, serve in the U.S. military "wherever ordered," and "swear unqualified allegiance to the United States...and forswear any form of allegiance or obedience to the Japanese emperor...."

The other version of this form was sent to Issei (first-generation Japanese immigrants) and women, both of whom were unqualified for military service, and bears the deliberately misleading title APPLICATION FOR LEAVE CLEARANCE. Its contents are very similar to the form filled out by Nisei, although the last few questions are changed. Instead of the military, respondents are asked if they would "be willing to volunteer for the Army nurse Corps or the WAAC," and are further asked if they have ever volunteered services or registered children with the Japanese or Spanish governments. Question twenty-eight was particularly challenging for Issei respondents - since they were barred from becoming U.S. citizens, many worried that renouncing their citizenship to Japan would leave them adrift. Others, including many Nisei, resented being asked to renounce loyalty to an emperor to whom they never paid obeisance in the first place. In response to concerted resistance by Issei, question twenty-eight was revised to erase any reference to the Emperor and read only "Will you swear to abide by the laws of the United States and to take no action which would in any way interfere with the war effort of the United States." A copy of that revision is also present in this collection.

Also present here are a genuine application for leave clearance which asks fairly straightforward questions about intentions and plans as well as two newspaper clippings from consecutive October 1943 editions of a Washington County, Arkansas newspaper (the location of the Rowher internment camp). The articles are both written by F.S. Root, who spent several days in Rowher examining it from the inside. His articles describe the layout and organization of the camp and lament the poor conditions suffered by inmates, but are primarily propaganda in their favor. Root extols the virtues of self- government in the camps and the bravery and ingenuity of the inmates, who are described as making the best of a bad situation. The incidental newspaper content around the clipped articles include advertisements for war bonds and local businesses, as well as college football scores for the 1943-44 season and a short article describing the return of British prisoners of war to the UK. The entire collection is enclosed in an official War Department envelope, addressed by stamp to the "Director of Extension Course" at the School of Aviation Medicine at Brooks Field. A fine collection of extremely significant documents in pristine condition. Cherston Lyon, "Loyalty Questionnaire." In DENSHO ENCYCLOPEDIA (online). (Inventory #: WRCAM57400)
$1,250.00 add to cart or Buy Direct from
William Reese Co. - Americana
Share this item