[Binding, Fine- Louis Herman Kinder, at The Roycroft Bindery] White Hyacinths, Being a Book of the Heart 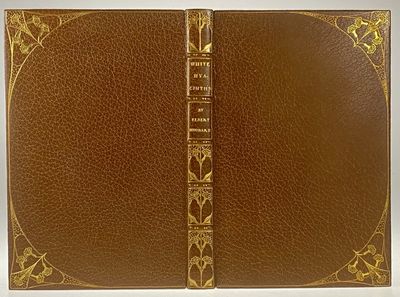 by Hubbard, Elbert
East Aurora, NY: The Roycrofters, 1907. First edition. Superbly bound by Louis Kinder at the Roycroft Bindery (see below) in sumptuous full crushed russet brown morocco by the Roycroft Bindery featuring an intricate and attractive typical Kinder design consisting gouge and stippling, with five blooming flowers in the corners of the front and rear covers. Similar design to four of six compartments to spine, with title and author in second and third compartments. Wide turn-ins with three flowers and scrolling gouges and stippling to the corners. Light brown mottled endpapers. Top edge gilt. Measures approx. 4.75" x 7". A beautiful example of "extra binding" from the Roycroft Shop. This very book is pictured in Wolfe's book, "Louis Herman Kinder, Bird & Bull Press, 1985, Illustration 26, where it is written, "Binding on a copy of Elbert Hubbard's "White Hyacinths, which the Roycrofters published in 1906. This binding is attributed by the authors to Louis Kinder..." Kinder never signed his bindings, so most if not all of those documented to be by Kinder come from biographical and scholarly comparison of his binding style. #47 of 207 copies on Japan Vellum. 162pp. TEG. One of the more celebrated of all of the Roycroft titles, fully designed by Dard Hunter, with his vignette tinted initials throughout. With the original "Notice. How to Open a Book," laid in. Full morocco bindings by Kinder at the Roycroft Bindery, their most accomplished binder, are indeed rare and sought after. Fine. (Inventory #: 5811)
$2,850.00 add to cart or Buy Direct from
Nudelman Rare Books
Share this item