The First KKK Parade in the Northeast - Racist Anti-Immigrant March 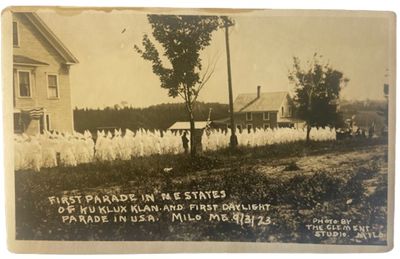 by KKK, Maine
This real photo postcard shows racism rearing its head in rural Milo, Maine with the Ku Klux Klan parading in white hoods in their first Northeastern public march. Milo, Maine: Clement Studio, 1923. September 3rd, 1923. Black and white silver gelatin photograph. 5.25" x 3.5" inches. This event was the first Klan parade in the Northeast as well as the shadowy organization's first daylight parade nationwide. Milo is a small town in central Maine whose centennial anniversary included the march of 75 Klansmen pictured. The Klansmen are seen in their fully white hooded regalia, some with American flags in tow, marching through the sleepy town. The Klan in this area directed its intimidation at the Catholic population including the French-Canadians and Irish who formed sizable minorities in the state. Maine had an active and conspicuous Klan revival in the 1920s, with Milo being but one of a handful of locations within the state to see shows of force by the KKK as well as open recruitment. Anti-immigrant sentiment was high in the 1920s, a time when the Klan was flourishing following D.W. Griffith's 1915 film The Birth of a Nation, a hallmark in white supremacist propaganda, mythologizing the founding of the first Klan. The Klan employed marketing techniques and a fraternal structure to maintain white supremacy, opposing Jews, the Catholic Church and African Americans as rightful members of American society. Its membership peaked between 1.5 and 4 million in 1924 before declining rapidly in the late 1920's. Minor small stain along upper margin, not affecting image. Overall in very good condition and rare. (Inventory #: 17734)
$425.00 add to cart or Buy Direct from
Share this item
Max Rambod Inc.
Offered by


(click for more details about Negroes in American History: A Freedom Primer)
View all from this seller>