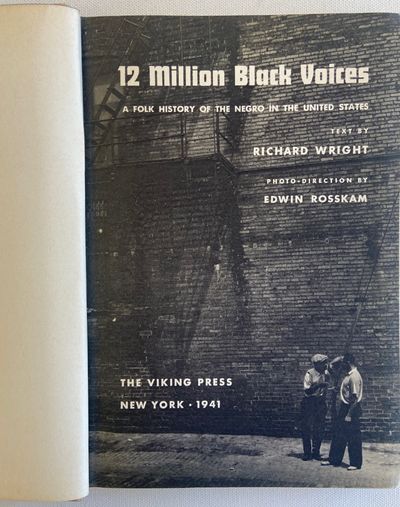 first edition
by Wright , Richard
Richard Wright. 12 Million Black Voices. New York: The Viking Press, 1941. First edition. Original cream clothbound boards, 152 pages, measuring 7 inches by 10 inches. 88 black and white photographs depicting black Americans in their daily lives captioned poetically by Wright in his signature, bold style. The book uses a combination of text and highly evocative images to describe the state of black life in America, emphasizing the ordinary and difficult conditions faced by the majority of African Americans. Photographs and captions depict gruelling working conditions and racist violence, as well as the nourishing bonds of home. Photo-direction by Edwin Rosskam. Beneath photos of police restraining protesters, for instance, the caption reads, "We are always in battle. The tidings of victory are few." with striking images photos by Dorothea Lange, Jack Delano, Russell Lee, Ben Shahn, and others. Boards lightly scuffed and soiled,Interior very clean and textblock tight. Overall in very good condition. A beautifully composed book documenting the life of ordinary African Americans in the 1940s. (Inventory #: 17827)
$550.00 add to cart or Buy Direct from
Share this item
Max Rambod Inc.
Offered by