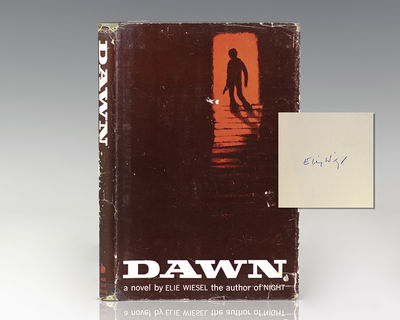 by Wiesel, Elie
New York: Hill and Wang, 1961. First edition of the author's second book in his acclaimed Night Trilogy. Octavo, original cloth. Boldly signed by Elie Wiesel on the front free endpaper. Very good in a very good dust jacket. Jacket design by Alex Tsao. Translated from the French by Frances Frenaye. Elisha is a young Jewish man, a Holocaust survivor, and an Israeli freedom fighter in British-controlled Palestine; John Dawson is the captured English officer he will murder at dawn in retribution for the British execution of a fellow freedom fighter. The night-long wait for morning and death provides Dawn, Elie Wiesel's ever more timely novel, with its harrowingly taut, hour-by-hour narrative. Caught between the manifold horrors of the past and the troubling dilemmas of the present, Elisha wrestles with guilt, ghosts, and ultimately God as he waits for the appointed hour and his act of assassination. Dawn is an eloquent meditation on the compromises, justifications, and sacrifices that human beings make when they murder other human beings. (Inventory #: 132532)
$975.00 add to cart or Buy Direct from
Raptis Rare Books
Share this item