Observations on Certain Documents Contained in No. V & VI of "The History Of The United States For The Year 1796," in which the Charge of Speculation against Alexander Hamilton, late Secretary of the Treasury, is Fully Refuted. Written by Himself 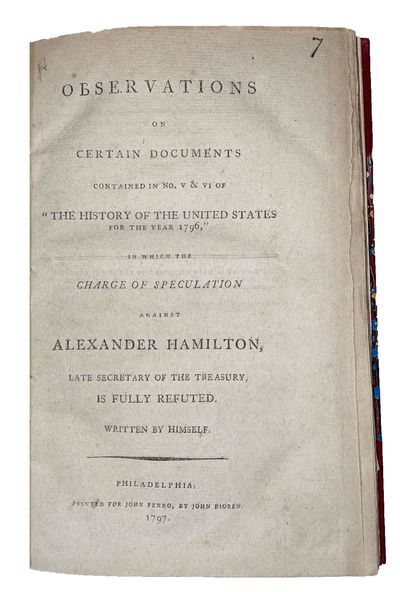 First edition of the infamous Reynolds pamphlet in which Hamilton confesses to his affair with Mrs. Reynolds

The first edition of the infamous "Reynolds pamphlet," in which Hamilton describes his affair with Maria Reynolds and admits to paying off a blackmailer. In the summer of 1791 twenty-three-year-old Maria Reynolds contacted Hamilton at his Philadelphia residence in apparently dire straits. She claimed that her husband had abandoned her and that she needed Hamilton's help, as a New Yorker, to relocate to New York City; a seemingly reasonable request considering that Elizabeth Schuyler was in Albany with Hamilton's parents. Hamilton agreed to see Mrs. Reynolds that evening, but it soon became clear that she wanted more from him than money, as he would later write in this pamphlet. She then became the superstar politician's mistress, and their affair continued into December at which point Hamilton's misdeeds would come back around to bite him in the form of a letter from Mr. James Reynolds. Mr. Reynolds wrote Hamilton a letter explaining that he knew of the politician's affair with his wife (something he may have been conspired with her to start in the first place), and that he could no longer live with her because of it. Mr. Reynolds went on to blackmail Hamilton, demanding $1,000 (an astonishing approximately $29,000 in today's money) to leave Philadelphia for good and his wife for Hamilton to do with as he saw fit. Shockingly, Hamilton paid the exorbitant sum and, even more shockingly, continued his affair with Mrs. Reynolds. Unsurprisingly, Mr. Reynolds did not leave Philadelphia, and he instead continued to solicit and coerce smaller payments from Hamilton after each assignation. In November 1792, Mr. Reynolds, being the serial schemer he was, was imprisoned for forgery unrelated to his blackmailing of Hamilton. Hamilton denied the man legal help in a move that he would certainly come to regret as Mr. Reynolds subsequently sought out a meeting with his Democratic-Republican political rivals, including James Monroe. In that meeting Mr. Reynolds charged that Hamilton had begun an affair with his wife and had been engaged in illegal speculation while Secretary of the Treasury. When confronted, Hamilton was forced to come clean about his infidelity and the blackmail it caused him to undergo, though he refuted the claims of speculation and was ultimately believed by his rivals on this count. At this point, Hamilton seems to have finally ended his affair with Maria Reynolds, who remarried in 1795, but this wouldn't be the end of the troubles caused by his infidelity for three reasons: James Monroe had made copies of the correspondences between the Reynoldses and Hamilton; Monroe then sent copies to Thomas Jefferson; and Hamilton continued to lambast Jefferson's public policies and, quite hypocritically, his personal conduct as well. By the summer of 1797, James Callendar brought the accusations of infidelity and illegal speculation to the public in the form of two pamphlets subsequently collected in The History of the United States for 1796; Including a Variety of Interesting Particulars Relative to the Federal Government Previous to that Period. In the face of complete disgrace, Hamilton responded by releasing this extraordinary pamphlet. In a bid to save whatever he could of his reputation and career, Hamilton fully admitted to his affair and the ensuing blackmail scandal, but he also fully disproved the, possibly more damaging, charges of financial impropriety. Hamilton's marriage and status as a public figure survived the scandal, but, despite disproving any actually criminal charges, the pamphlet marked an end to his political career by destroying his public reputation and in turn his chances of winning any elected office. The scandal proved so damaging to Hamilton's political career that his family tried to have the Reynolds Pamphlet destroyed. Fortunately, however, some extremely rare first editions (of which this is one) remained and were reprinted by Hamilton's anti-Federalist rivals in 1800.