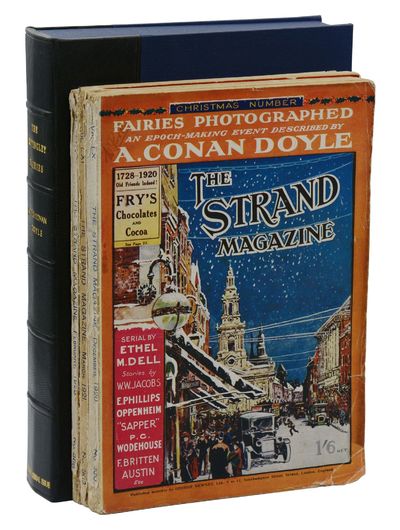 by Doyle, Arthur Conan
London: Georgnes Newnes Ltd, 1923. The saga of mystery author Arthur Conan Doyle's involvement in the famous "fairy photographs," one of the greatest photographic hoaxes of all time, unfolds in three issues of the popular British magazine The Strand. Ironically, the creator of arch-logician Sherlock Holmes was publicly duped by two cousins, aged 9 and 16. Publisher's pictorial wraps; house in a custom blue cloth clamshell case backed in navy sheep and lettered in gilt. December 1920 issue - "Fairies Photographed," pages [462]-468. March 1921 - "The Evidence for Fairies," pages 199-206. February 1923 - "Epilogue," page [49]. Very Good overall, given the fragility of the magazines. Chipping at extremities, creased spine Rear wrap of March 1921 detached; penciled name on front wrap. This is the first serial issue of Doyle's writing on the Cottingley fairies, which garnered the photos immense popular interest. Work by Aldous Huxley, P.G. Wodehouse, and other top writers of the day also featured. Rare. (Inventory #: 140943038)
$3,000.00 add to cart or Buy Direct from
Burnside Rare Books
Share this item
Burnside Rare Books
Offered by

No Easy Walk to Freedom: Articles, Speeches, and Trial Addresses of Nelson Mandela

New York : Basic Books , 1965
(click for more details about No Easy Walk to Freedom: Articles, Speeches, and Trial Addresses of Nelson Mandela)
View all from this seller>