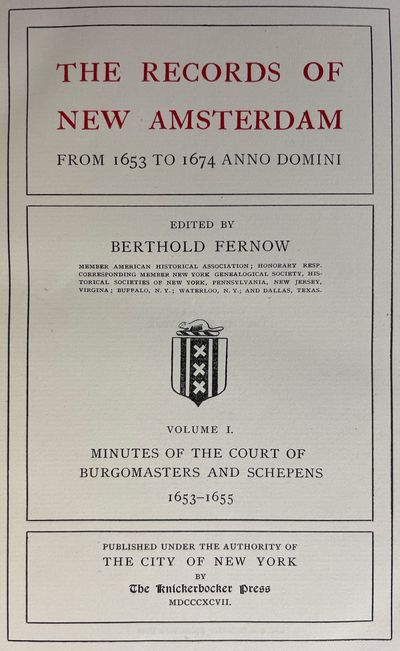 In the 1830s, Cornelius Westbrook was hired to translate the ordinances of the city and the first book of court minutes. In 1848, Edmund B. O'Callaghan was hired to continue and complete Westbrook's translations. In this edition, Berthold Fernow made a completely new translation of volume 1, which he considered to have been poorly translated previously, and revised and edited the rest of the volumes. "This work contains the earliest Dutch Records that have been preserved of the territory included in the present City of New York, the earlier ones having long ago disappeared." The volumes are translated into English and edited by Berthold Fernow and show the "Minutes of the Burgomasters and Schepens of New Amsterdam from 1653-1674 across multiple volumes. The volumes represent important primary source accounts of early New York City and its governance. It is an important collection for those interested in colonial New York City or colonial America in general. (Inventory #: 38815)
$1,200.00 add to cart or Buy Direct from
Donald A. Heald Rare Books
Share this item
Donald A. Heald Rare Books
Offered by