Acts Passed at a Congress of the United States of America, Begun and Held at the City of New-York, on Wednesday the Fourth of March...Being the Acts Passed at the First Session of the First Congress 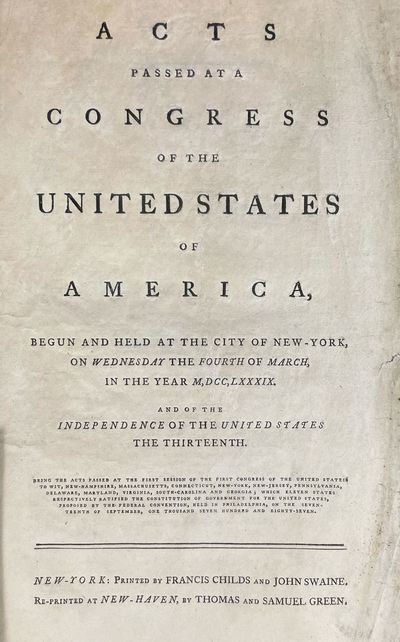 by [AMERICANA]
New York: Printed by Francis Childs and John Swaine. Re-printed at New Haven, by Thomas and Samuel Green, 1789. Folio. 81, (1) pp. Original limp blue wrappers, stab-sewn with original thread. Several contemporary or near-contemporary signatures on front wrapper, including that of Renee Butler, Lucretia Cook, and Allan Von must (?), as well as the name of "Harrington Parish" (a Presbyterian meeting house in Maine), all edges uncut.

First New Haven edition of acts passed at the first session of the first congress. Including the house printing of the Bill of Rights.

Rare New Haven folio edition of the official acts of the first United States congress. This important volume comprises the acts establishing the Executive Department, the Treasury Department, the Post Office, the judicial courts, the War Department, and other articles establishing compensation for the President, Vice President, and members of Congress. It also contains the first 12 proposed amendments to the Constitution, drafted by James Madison. Articles 3-12 would be ratified on December 15, 1791, forming the first ten Amendments known as the Bill of Rights. Article 2 would be ratified as the 27th Amendment in 1992, while Article 1 is still pending ratification. Harrington Parish was a Presbyterian meeting house built in 1772 in Bristol, Maine, near Fort William Henry. It operated continuously until its final service in 1915. Folio printings of the 1789 first acts of the first Congress and Bill of Rights, published in any city, are extremely rare. We can locate only seven copies of this edition, in the following institutions: The American Antiquarian Society; The New York Public Library; Yale University, Sterling Memorial; Faulkner University; Indiana University; Connecticut Historical Society; Henry E. Huntington Library and Art Gallery. This is the first copy of this printing to be offered at auction in over a hundred years. In 1913, Anderson Galleries referred to this edition as "very rare."