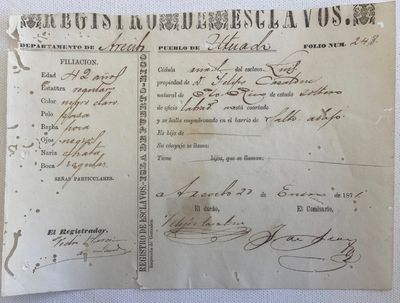 by Slavery, Puerto Rico
Registro de Esclavos. 8.5" x 6" inches. Slave registry document from the Puerto Rico's Arecibo region, dated 1871. Document is numbered "Folio Num. 248." This document includes sections with a physical description of the person in question as well as a record of the slave's ownership. This document records the ownership of "Luis" by Don Felipe Casator in the Pueblo of Utuado, Arecibo. Has a stamp on verso of the "Cedula Rural", a Spanish bureaucratic institution that issued identification cards. Bears signatures of the owner, "El dueno", the notary, "El Registrador",and an official "El Comisario." This slave registry document was issued two years before slavery was abolished in Puerto Rico, on March 22, 1873. However, slaves were still obliged to work for three more years after abolition and masters were compensated 35 million pesetas per slave. Has experienced some wormholing along left edge and scattered elsewhere, but only minorly affects text. The top of the document has been cut but the title, "Registro de Esclavos", is still legible. Some toning concentrated in the middle of the document, but overall this piece is in good condition. (Inventory #: 17684)
$450.00 add to cart or Buy Direct from
Share this item
Max Rambod Inc.
Offered by