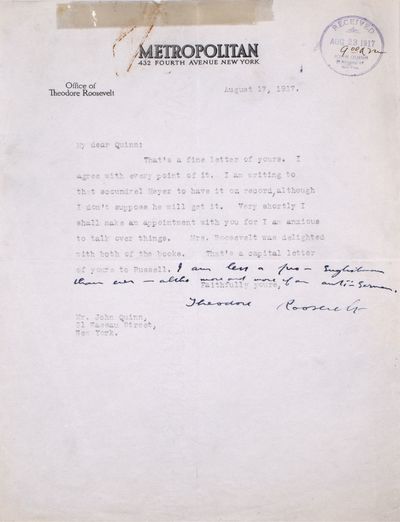 The first two letters discuss literature and Quinn's efforts to promote the planned tour by Irish poet and author Douglas Hyde (1860-1949), president of the Gaelic League since its founding in 1893. Roosevelts asks Quinn to bring Hyde to lunch at the White House. During his long fund-raising visit in 1905-6, Hyde twice visited the White House. "Shane Leslie believes that Quinn had in effect, by this early establishment of his stature, 'made' Douglas Hyde the eventual first president of Ireland" (The Man from New York, p. 42).
i. Typed Letter, signed, on White House stationery, Oyster Bay, 26 August 1905, Personal, to Quinn in his capacity as Secretary, Irish Literary Society of New York: "When Dr. Hyde comes here next November will you bring him on to Washington and both of you take lunch with me at the White House?" (signature bold but slightly smeared); with retained envelope.
ii. Typed Letter, signed, on White House stationery, Oyster Bay, 1 September 1905, Personal, "I thank you for those very beautiful songs, gotten up as they are in a really beautiful garb, and for the wording of the note with which you have sent them." Quinn had sent Roosevelt a copy of Hyde's Love Songs of Connaught, printed by Miss E.C. Yeats at the Dun Emer Press, 1904 (not present); with retained envelope.
iii. Typed Letter, signed, Oyster Bay, 2 April 1915, "Here are the four volumes of Connolly. Two I have inscribed for you and two for Lady Gregory. I think Connolly is one of the best of the young American writers. [...] His seamen are as characteristic as Owen Wister's Westerners and are as strongly and almost as delicately drawn". In the Quinn sale two titles by James Brendan Connolly were inscribed from Roosevelt, lot 1771, Open Water (1910), and lot 1773, Wide Courses (1912).
iv. Typed Letter, signed, Oyster Bay, 31 December 1915. Thanking Quinn for a card, and conveying "best wishes for the New Year".
v. Typed Letter, signed, Oyster Bay, 38 May 1916, "I am sorry that it was not possible for me to accept your kind invitation to meet the Rev. Henry Brown." With ink post script added, "Good luck!"
vi. Autograph Letter, signed, Century Association letterhead, 20 July 1917, "I have seen my old friend T.P. O'Connor today; I told him that I thought you were the proper man for him to see. [...] Faithfully yours". With autograph envelope, John Quinn Esq., Present.
vii. Typed Letter, signed, Metropolitan letterhead, Office of Theodore Roosevelt, 17 August 1916, "That's a fine letter of yours. I agree with every point of it. [...] Mrs. Roosevelt was delighted with both of the books. That's a capital letter of yours to Russell." With addendum in ink, "I am less a pro-Englishman than ever, altho more and more of an anti-German".
With:
viii. Typed Letter, signed ("Theodore Roosevelt"), Oyster Bay, 9 December 1915, to Bainbridge Colby, "Many thanks for your note. I knew the term 'logothete' would appeal to you. Is it not The Tour of Dr. Syntax to which you refer?"
And:
ix. Three Autograph Letters, signed, and one autograph note, signed, from Edith Kermit Roosevelt to John Quinn, chiefly on literary topics, 1915-1918: on Joseph Conrad's Victory and Nostromo, Padraig Pearse and Noh plays, Conrad's The Shadow Line. In the last letter dated 6 September 1918, she asks after Quinn's health, "I cannot write of Quentin. Archie is with us. The Doctors hope he may regain the entire use of his arm."
And:
x. Copy typescript of eight-page letter from Major Francis Fletcher-Vane, to Theodore Roosevelt, 20 March 1917, an account of Fletcher's service in Dublin during the Easter Rising, and the murders of Skeffington, Dickson, and MacIntyre, shot without trial by command of Captain Bowen Coulthurst. Fletcher-Vane protested this illegal conduct to his superior officers in Ireland and in the absence of any action, went to the Under Secretary of War in London, and thence to 10 Downing Street to Morris Bonham Carter and Lord Kitchener. Fletcher-Vane was subsequently "relegated to unemployment". In conclusion, he expresses "personal gratitude for your sympathy with Ireland, and I hope some of your influence will now be utilized to obtain for Ireland her just demands, as Cuba was so wisely and promptly given hers by the U.S.A. Government."

Westchester, NY 1763
(click for more details about Two manuscript indentures for the transfer of land in the Colony of New York)
View all from this seller>