[View on the Delaware, near Bordentown] (German and French titles only) 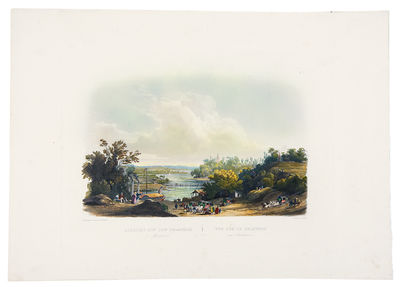 by BODMER, Karl (1809-1893)
Paris, Coblenz, 1842. Hand-coloured aquatint engraving by Ch. Vogel after Bodmer, blindstamp. A delightful, lively scene of the banks of the Delaware in high summer. A steamer awaits the arrival of passengers who are disembarking from their coaches. One coach pulls up full of late arrivals. Some passengers who boarded at an earlier stop take advantage of the delay to stretch their legs: all this and the tranquil landscape are brilliantly captured by Bodmer in this image executed on 24th July 1832 close by the 300 acre estate of Joseph Bonaparte, the exiled elder brother of the notorious former French Emperor. Karl Bodmer's images show great versatility and technical virtuosity and give us a uniquely accomplished and detailed picture of a previously little understood (and soon to vanish) way of life. Swiss-born Bodmer was engaged by Prince Maximilian zu Wied-Neuwied (1782-1867) specifically to provide a record of his travels in North America, principally among the Plains Indians. In the company of David Dreidoppel (Prince Maximilian's servant and hunting companion), their travels in North America were to last from 1832 to 1834. They arrived in Boston in July 1832, traveled on to Philadelphia, where they stayed with Napoleon Bonaparte's elder brother Joseph. From here they headed west across Pennsylvania across the Alleghenies to Pittsburgh and the Ohio country, visiting all the important German settlements en route. Their most important stop on their route west was at the utopian colony of New Harmony in Indiana. The Prince spent five months there in the company of some of the country's leading scientific men, and studying all the relevant literature on backcountry America. On 24 March 1833 the party reached St. Louis, Missouri, and the start of the journey into Indian country.