Imitations of Original Drawings ... in the collection of His Majesty, for the Portraits of Illustrious Persons of the Court of Henry VIII. With biographical tracts [by Edmund Lodge]. Published by John Chamberlaine 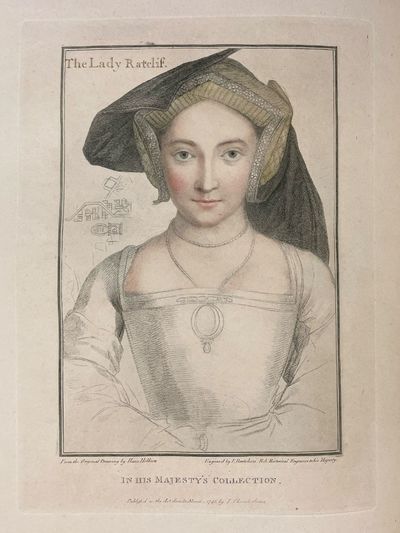 In Ray's words, "this magnificent work is surely the finest early example of English colour printing." The collection of Hans Holbein's drawings of the Lords and Ladies of the court of Henry VIII contains some of the most remarkable portrait studies ever made, and the group gives an accurate idea of the fashions and faces of the nobility of the period. "The originals, in chalk heightened with pen and metal-point, were made by Holbein during his two sojourns to England. They constitute preliminary studies for several of his most famous oil paintings. The drawings were originally in a volume now preserved in the Royal Library at Windsor Castle, called the Great Booke." Abbey says it is "in every way a splendid book, the colour printing reproducing with extraordinary fidelity the original designs." The earliest drawings date from Holbein's arrival in England about 1526, and subsequent drawings were done almost up until his death in 1554. The engravings are remarkably lifelike and seem very modern, particularly where the portrait is left partly in sketched form. John Chamberlaine, antiquary and keeper of the King's drawings, was responsible for making this publication happen, and it was he who sought out Francesco Bartolozzi's expertise. An original member of the Royal Academy as well as Engraver to the King after 1764, Bartolozzi (1728-1815) was instrumental in popularizing the stipple engraving method used here; Ray tells us he was a "master" of the method, "particularly as used for colour printing." There were two later reprints of this work, reduced in size to quarto, but Abbey states "the reduced reissue of 1812, reprinted in 1828, gives no idea of the book's quality."