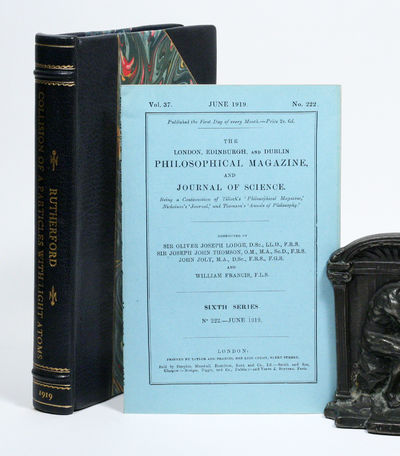 by RUTHERFORD, ERNEST
LONDON: Taylor and Francis, 1919. FIRST EDITION. ORIGINAL WRAPPERS. Fine. FIRST EDITION IN ORIGINAL WRAPPERS of Ernest Rutherford's announcement of the splitting of the atom and the discovery of the proton. One of the most significant papers of 20th-century science. PMM 411. "In the last year of war, in April 1919... Rutherford sent off a paper that, had he done nothing else, would earn him a place in history... As was usual with Rutherford's experiments, the apparatus was simple to the point of being crude: a small glass tube inside a sealed brass box fitted at one end with a zinc-sulphide scintillation screen. The brass box was filled with nitrogen and then through the glass tube was passed a source of alpha particles- helium nuclei- given off by radon, the radioactive gas of radium. The excitement came when Rutherford inspected the activity on the zinc-sulphide screen: the scintillations were indistinguishable from those obtained from hydrogen. How could that be, since there was no hydrogen in the system? This led to the famously downbeat sentence in the fourth part of Rutherford's paper: 'From the results so far obtained it is difficult to avoid the conclusion that the long-range atoms arising from collision of alpha particles with nitrogen are not nitrogen atoms but probably atoms of hydrogen... If this be the case, we must conclude that the nitrogen atom is disintegrated.' The newspapers were not so cautious. Sir Ernest Rutherford, they shouted, had split the atom. He himself realised the importance of his work. His experiments had drawn him away, temporarily, from antisubmarine research. He defended himself to the overseers' committee: 'If, as I have reason to believe, I have disintegrated the nucleus of the atom, this is of greater significance than the war.' In a sense, Rutherford had finally achieved what the old alchemists had been aiming for, transmuting one element into another." (Watson, The Modern Mind, 256-7).

Rutherford's experiment convinced him that the nitrogen nucleus was composed of hydrogen nuclei; the hydrogen nucleus, therefore, must be an elementary particle. Rutherford named it the ' proton,' from the Greek 'protos,' meaning 'first.' Printing and the Mind of Man, 411. Particle Physics... Chronological Bibliography: "Discovery of the Proton".

In: The Philosophical Magazine, Vol. 37, No. 222, pp.537-87; June 1919. London: Taylor and Francis, 1919. Octavo, original wrappers; custom box. In outstanding condition: An almost perfect copy, except for a little soiling to rear wrapper and final leaf of issue.