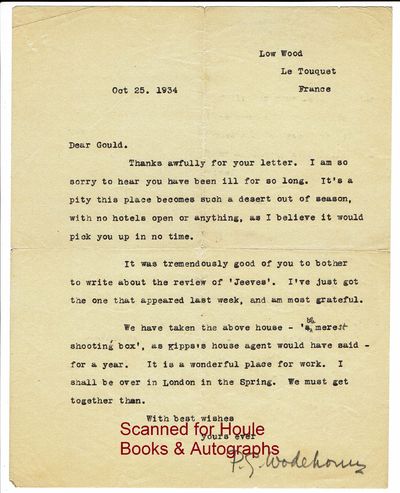 
This was Wodehouse's first year in Le Touquet. He would stay here until he was arrested in June, 1940, by the Germans. He was placed in an internment camp. He was later allowed to make a series of controversial radio broadcasts on German stations.
Together with a Typed Letter Signed dated 23 May, 1989 on AP Watt Ltd London, letterhead to collector James Heineman who speculates that the recipient to the 1934 letter was Gerald Gould. (Inventory #: 2222416)
$1,500.00 add to cart Available from
Houle Rare Books & Autographs
Share this item
Houle Rare Books & Autographs
Offered by

“…And Some Were Human”

Philadelphia : Prime Press , 1948
(click for more details about “…And Some Were Human”)

To The Last Man

New York : Harper & Brothers Publishers , 1921
(click for more details about To The Last Man)
View all from this seller>