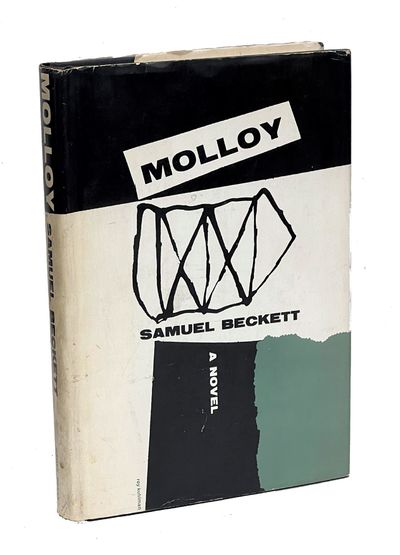 by Beckett, Samuel
New York: Grove Press, 1955 Translated by Beckett and Patrick Bowles. First American edition, first printing. Review copy with date stamped on rear free endpaper and note from Grove Press laid in. Publisher's black boards with titles in gilt to spine; in its original black, white, and green dust jacket designed by Roy Kuhlman, with photo of Beckett to rear panel. Near fine copy with some dimming to gilt on spine, and a few light spots to top edge of text block and one to top edge of rear board; very good unclipped dust jacket with some toning and light soiling to spine, light wear to top edges and head of spine, and a light spot to front panel. Overall, a pleasing copy, with the review slip present. Molloy is a novel that tells the intertwined and uncannily similar inner monologues of the vagrant Molloy and Moran, the private detective who is searching for him. Although the structure of the novel indicates that these are two stand-alone, chronological tales, the reader realizes over the course of the text that the two men are likely incarnations of the same identity. Molloy is the first novel in Beckett's influential Trilogy, written in Paris from 1947-1950, which also includes Malone meurt (1951) and L'innommable (1953). Beckett, an Irish author and native English speaker, moved to France and subsequently transitioned from writing in English to French, including this novel. For this American first edition, Beckett translated the work with the assistance of South Africa writer Patrick Bowles, the latter of whom described the process as "slow, painful work…Wrung and thrashed and hammered out." This Grove Press edition was produced photo-offset from the edition published in Paris by Collection Merlin / The Olympia Press.. First Edition. Hard Cover. Very Good/Dust Jacket Included. (Inventory #: SB017)
$300.00 add to cart or Buy Direct from
B & B Rare Books
Share this item

New York: Covici-Friede , 1934
(click for more details about A Cool Million: The Dismantling of Lemuel Pitkin)
View all from this seller>