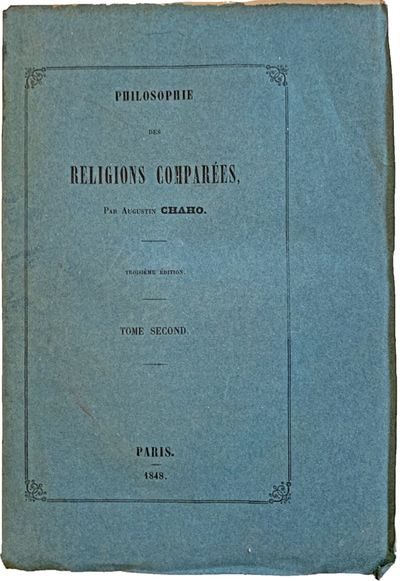 by CHAHO, Augustin [Joseph Augustin] [Agosti Xaho] (1811-1858).
Paris,: 1848, 1848. Two volumes. 8vo. xxiv, 480; viii, 547, [1] pp. Original blue printed wrappers; some chipping to spine of vol. I, but cords strong. Very good. Third edition of the author's philosophy of comparative religions. It seems evident from online resources that this third edition is the only available edition. The work was first issued in 1847 (no copies located [WorldCat], and the same for any copy of a second edition. Chaho organized his treatise into diverse views on light, believers, Atheists, mysteries, polytheism, miracles, and much more. He includes the Hebrews, Indians, Persians, Egyptians, cults, superstitions, symbolism, allegories, Confucius, etc. / Joseph Augustin Chaho, or Agosti Xaho, French Basque writer, historian, Indianist, philologist and politician, was considered a precursor of Basque nationalism, a pioneer of secularism and republicanism in the Basque Country. He also wrote a vital work on the Basques, Travel to Navarre during the insurrection of the Basques (1830-1835). / Chaho's unbridled imagination led him to write works that became well known. In Paris he published Paroles d'un Voyant in reply to Paroles d'un Croyant, by Lamennais. His firseaut Basque publication is Azti-beguia, Agosti Chaho Bassaburutarrak Ziberou herri maiteari Parisetik igorririk beste hanitchen aitzindari arguibidean goiz izarra (Paris, 1934, 14 pp.). Its title already gives a glimpse of who Chaho was: "Eye of a soothsayer (or magician) sent from Paris to his beloved village of Zuberoa by Agustín Chaho, from Basaburúa, morning star on the luminous way, forerunner of many others". It is written in the Basque language. There are elements of geology and cosmogonic astronomy in this booklet. This was followed by Voyage en Navarre pendant l'insurrection des basques (1830-1835) (Paris, 1836, 456 pp. and 3 plates). / He soon devoted himself to grammatical studies. When he is only twenty-six years old, he publishes Etudes grammaticales sur la langue euskarienne, in collaboration with A. Th. d'Abbadie (Paris, 1836). He dedicated the book to the "Zazpirak-Bat", which makes him a precursor of this motto. In 1838 he tries to initiate in Toulouse a newspaper, Revue de Voyants. Before returning to Euskalerria in 1840, he published in Paris the booklet L'espagnolette de S. Louis, Agonie du Parti Revolutionnaire en France and Lettre a Jacques Laffitte. Already established in Baiona, he collaborates with Viscount Belzunce in the writing of Histoire primitive des Euskariens-Basques. Four years later he founded his newspaper Ariel, oriented to republican ideas and polemics. He published in 1846 Philosophie des religions comparees and, in 1847, the mentioned Histoire primitive des Euskariens. In 1848 he wrote the novel Lelo ou la Navarre il y a 500 ans. / See: Gustave Lambert, de Bayonne, Etude sur Augustin Chaho, auteur de La philosophie des religions comparees, Paris: E Dentu; Bayonne: L. Andre, 1861. p. 590. (Inventory #: AH1105)
$235.00 add to cart Available from
Jeff Weber Rare Books
Share this item