[Upanisad-vakya-kosah] A Concordance to the Principal Upanishads and Bhagavadgita. 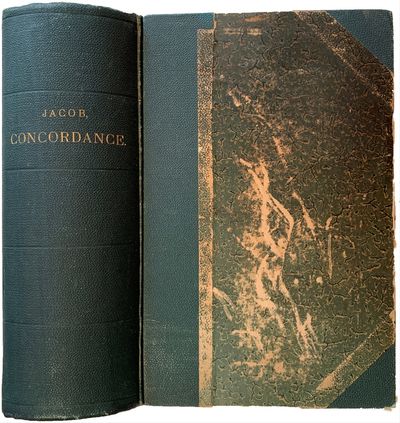 by JACOB, G. A., Colonel [George Adolphus] (1849-1918).
Bombay:: Government central Book depot, 1891., 1891. Thick 4to. 8, 1083, [1] pp. Mostly printed in double columns. Early half dark green blind- and gilt-stamped cloth, marbled boards; extremities rubbed or scuffed, corners showing. Very good. Scarce. A nice copy. Limited edition of 750 copies. George Adolphus Jacob was one of the foremost Sanskrit scholars of his day. This particular copy with added distributor's label on title: Leipzig: K. F. Koehler's Antiquarium, The author tells in his preface that he spent 7 (and more) years compiling and translating this concordance of citations from the Upanishads, giving the original known sources for many words. / "George Adolphus [Jacob] was born on 21st August 1846, the son of George Andrew Jacob DD. He was educated at the Sheffield Collegiate School where his father was headmaster at the time. At the age of 16 he went to India, by the Cape, to join the 22nd Bombay Infantry, arriving in March 1857. In 1858 he became a member of the Bombay Staff Corps and until 1861 was engaged in regimental staff duties. In the latter year he joined the Poona School of Instruction. He rose to become Superintendent of the Native Army School, in which post he continued until his retirement. He was also Director of Instruction for the Bombay Presidency." / "Returning to England in 1890 he settled at Redhill and concentrated upon his Sanskrit studies, in which he had become engaged whilst still serving in India. He published a number of books and articles. A literal translation of the Meghaduta had been published in 1870, and two valuable articles contributed to the Royal Asiatic Society's journals in 1897 and 1898. including the first edition of Udbhata's work. In Philosophy he studied the Yoga, Mimansa and Vedanta systems and the Upanisads. His edition of the Upanisads comprised two volumes in the Bombay Sanskrit Series. Amongst other publications his manual of Hindu Pantheism, an annotated translation of Salananda's Vedantasara passed through several editions from 1881 onwards. In 1914 he received the Hon Degree of Litt D from Cambridge University. Some of his works have been reprinted over the past few decades, as the copyright to the originals expired." / "He was an accomplished scholar of Indian languages. According to his Record of Service, he obtained interpreter's level in Hindustani in January 1859, and the same (with credit) in Marathi in October 1860, and High Proficiency in Sanskrit in October 1866. He also had a slight knowledge of Persian. It is extraordinary how quickly the mail was sent between India and the UK. A letter written by a sister of George Legrand Jacob, we don't know which one, congratulates Adolphus on 23rd March 1859 for passing his interpreters level in Hindustani. It also goes on to state that she was pleased he had recovered from his great illness. It also laments the death of Adolphus's uncle John (John Jacob of Jacobabad)." / "Colonel Jacob published works of high value. He contributed several volumes to the well-known Bombay Sanskrit Series, which contains some of the best editorial work of Indian scholars like K. T. Teland, Shankar Pundit and Sir R Bhandarkar, and of European Sanskritists such as Buhler, Kielhorn, Peterson and Fuhrer. Col Jacob's most valuable and useful contribution to this series was his large concordance to the principal 66 Upanishads and the famous Bhagwad Gita, on which he labored for twelve years, and which appeared in 1891. He also published a translation of the epitome of the Vedanta which furnishes a useful manual of Hindu pantheism." – Jacob family [online]. Extra Postage will apply. (Inventory #: AH1141)
$325.00 add to cart Available from
Jeff Weber Rare Books
Share this item