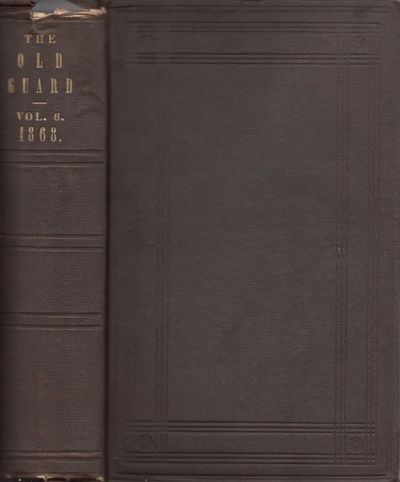 by [The Old Guard]
New York: Van Evrie, Horton & Co, 1868. Hardcover. Good. Thick quarto. [1], iv, 960 pages, [1]. Some illustrations. Brown cloth covered boards ruled in blind. Gilt tile on the spine. Cloth is chipped head of the spine, worn on the corners and base of the spine. Hinges are sturdy and contents very clean. Period gift inscription written on the right front flyleaf. This volume contains 12 issues of the Old Guard January through December. There are color lithograph frontispiece illustrations present for January, March, April, May and June issues. One frontispiece steel engraving present in the August issue. No other illustrations. A sample of contents include "Tricks of President-Making", "The Principles and the Policy of Democracy"; "Battles of Virginia including Sharpsburg and Gettysburg"; "The Mongolian"; "A Sharp Letter From a Southern Gentleman"; "Secrets Let Out of the Senate Chamber"; "Political Literature of America"; "The Southern Heroic Dead"; "The Presidents Powers of Removal Without Consent of the Senate"; "The Indian"; "The Nature of the Rump Revolution"; "Modern and Ancient Ideals of Liberty Contrasted"; "The Last Battle of "Stonewall" Jackson"; "The Negro"; "French Jacobins and American Abolitionists"; "Maimed at Chickamauga"; and much more. A northern periodical with no editor information provided but attributed to C. Chauncey Burr. Early on in his career Burr was antislavery but changed his views during the Civil War and became a staunch "Copperhead" and Democrat. (Inventory #: 26160)
$150.00 add to cart or Buy Direct from Americana Books
Share this item

Appendix D of the Report of the Adjutant General of the State of Maine, For the Years Ending 1864 and 1865

Augusta : Stevens & Sayward , 1866
(click for more details about Appendix D of the Report of the Adjutant General of the State of Maine, For the Years Ending 1864 and 1865)

by Lawrence, Edward A. D.D.

Hartford : Hamersley & Co , 1871
(click for more details about The Life of Rev. Joel Hawes, D.D. Tenth Pastor of the First Church, Hartford, Conn)
View all from this seller>