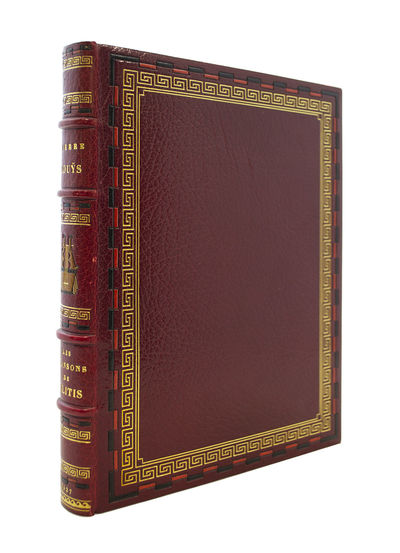 by LOUüS, Pierre
Deluxe Limited Edition, With an Original Watercolor LOUüS, Pierre. [Sauvage, Sylvain, artist]. Les Chansons de Billitis. Traduites du Grec [Paris: Sylvain Sauvage, 1927]. Deluxe limited edition. One of forty numbered copies on Japon Imperial, this being number 39. With an original signed watercolor for the plate on page 146. And 36 color woodcuts which are full paged, by Sauvage and engraved by wood-engraved, in color by Pierre Bouchet. Also, an extra suite of matching black and white illustrations bound in. And at the rear a set of separations for the plate on page 53. Quarto (11 1/8 x 8 1/2 inches; 283 x 215 mm). Beautifully bound by Rene Aussourd in full red morocco. Boards tooled in gilt in a Greek key pattern and an inlaid geometric pattern in red and black morocco. Spine stamped and lettered in gilt and with the same inlaid pattern as well as an inlaid center device on spine in tan morocco. Board edges gilt. Gilt dentelles. Inside boards with red watered silk pastedowns and black inlaid morocco borders. Red watered silk free endpapers, and additional red paper endpapers with speckled pattern. Top edge gilt, other uncut. A beautiful example of a lovely book. Housed in a red marbled slipcase with red morocco tips. Overall an about fine copy. "When Les Chansons de Bilitis first appeared in bookshops in December 1894, they were presented as faithful translations by 'P. L.' of hitherto unknown Greek poems found on the walls of a sixth-century BC tomb, newly discovered in Cyprus. The poet was named as Bilitis, a young woman born of a Greek father and Phoenician mother, and a contemporary and acquaintance of Sappho. The volume is divided into three main sections that first narrate Bilitis's girlhood and adolescence in rural Pamphylia, on the southern coast of modern Turkey, and her love for the youth Lykas, with whom she has a daughter she will abandon; then her early adulthood in Mytilene, the capital of the island of Lesbos, where she has a passionate affair with a young female companion, Mnasidika, whom she ëmarriesí but who will ultimately betray her; and finally her later years in Cyprus, where she becomes a courtesan and leads a life of sexual licence and Dionysiac revelry. Three epitaphs, said to decorate her sarcophagus, bring her story to a close." (David Hunter, The Rimbaud and Verlaine Foundation). HBS 68701. $7,000 (Inventory #: 68701)
$7,000.00 add to cart Available from
Heritage Book Shop
Share this item

Inquiry into the Nature and Causes of the Wealth of Nations

London : Printed for W. Strahan; and T. Cadell , 1778
(click for more details about Inquiry into the Nature and Causes of the Wealth of Nations)

London : Bradbury & Evans, Whitefriars , 1850
(click for more details about Personal History of David Copperfield)
View all from this seller>