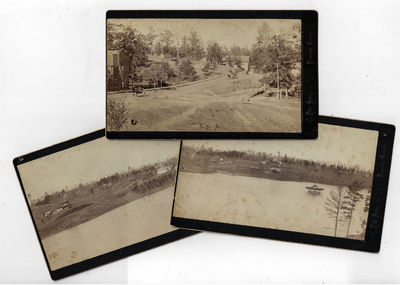 by Fisher, Carey William (Photographer)
Three albumen prints, each about 4.5" x 7", on black card mounts reading "C. Will Fisher, Demorest, Georgia." One shows a wide street on a slope, with a buggy and a storefront in the foreground. On the back in pencil: "Jessie Ashby in cart, Dr. Fitch's horse and cart" and "Mrs. -------'s store, after Mr. Dunlap's." The other two show houses spread along shore around Lake Demorest;one has "1890" written on the back. Demorest was founded in 1889 by the Demorest Home, Mining & Improvement Company--a corporation made up of nine prohibitionists whose goal was to build a model city without alcohol in a cultural environment where schools, churches and industry would be promoted for the development of ideal home and family life. The lake, a city park, and a commercial district were part of the planned community. Photographer Carey William Fisher (1849-1919) was born in Indiana, lived and worked as a photographer for some time in Harlan, Iowa, and moved to Georgia in 1889. His daughter, Genevieve, also became a photographer. (Inventory #: 21583)
$150.00 add to cart or Buy Direct from Walkabout Books
Share this item

One Hundred Years in Yosemite, The Story of a Great Park and Its Friends

Berkeley : University of California Press , 1947
(click for more details about One Hundred Years in Yosemite, The Story of a Great Park and Its Friends)

Little Rock, AR : St. Louis, Iron Mountain and Southern, and the Little Rock and Fort Smith Railroads
(click for more details about Arkansas Fits the Bill)
View all from this seller>