The Intent Of Capital Punishment. A Discourse Delivered In The City Of New-Haven, October 20, 1790. Being The Day Of The Execution Of Joseph Mountain, For A Rape 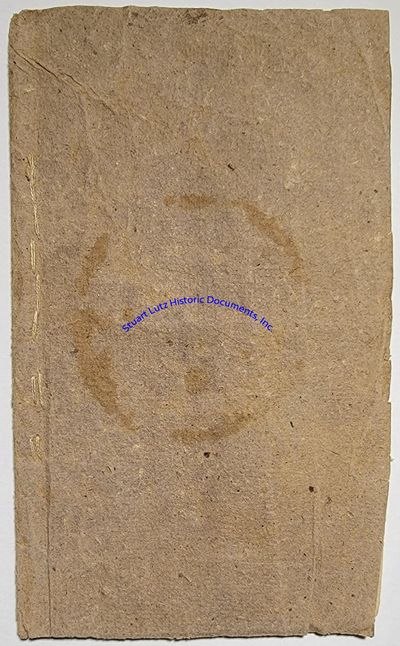 first edition
by (AFRICAN-AMERICAN / THE INTENT OF CAPITAL PUNISHMENT)
(AFRICAN-AMERICAN HISTORY) The Intent of Capital Punishment. A Discourse Delivered in the City of New-Haven, October 20, 1790. Being the Day of the Execution of Joseph Mountain, for a Rape. James Dana, D.D. Pastor. New Haven: Printed by T. and S. Green, [1790]. 28pp. First edition. Original drab wraps. Pages 17/18 bound out of sequence. Half-title and C⁴ expertly mended with tissue; Very Good. Rare. Early Republic sermon concerning Joseph Mountain, an escaped enslaved African American executed for the capital crime of raping a young white girl. An estimated crowd of ten thousand witnessed Joseph Mountain’s death. At his trial, Mountain plead not guilty. Dana’s The Intent of Capital Punishment —published two weeks after his hanging— vigorously refuted Mountain’s declaration of innocence. According to its author and New Haven pastor James Dana (1735–1812), his sermon was preached to “one doomed to death by public justice, and but a few hours before his launching into eternity.” (p6). Scholar Brian Baaki in his article entitled “Circulating the Black Rapist: Sketches of the Life of Joseph Mountain and Early American Networks of Print” writes that of the known executed rapists between 1700 and 1820, more than eighty percent were of African descent. Like Dana’s Intent sermon, Sketches of the life of Joseph Mountain… (Evans 22441) —Mountain’s purported first-person narrative— was also published in 1790 and, as well, in New Haven. Sold at Mountain’s execution, his criminal “confession” was subsequently reprinted; “the only text of this kind with African American subject to achieve such a widespread circulation and redistribution.” In Baaki’s view, Sketches documented the “emergence of a central figure in American culture, the mythologized black rapist, which reached its apotheosis during the lynching crisis of the Jim Crow era.” Affirming other scholarship, Baaki identifies Mountain’s Sketches as the second earliest published African American “confessional” rape narrative to promote the myth of the Black rapist. Baaki suggests its publication amplified, in some part, white fears of Black slave uprisings. (Baaki, pp37–39) Dana’s sermon pointedly addresses Mountain’s Sketches: “If the history of your life, taken from your own mouth, and this day published, may be credited, you have been almost in all evil for sixteen years past; that is, ever since you were seventeen years old, and left your master’s family [...] Your past unprincipled and shameless character, and this only, can explain that apparent indifference to your state, during a great part of your imprisonment, which hath astonished us.” (pp22–24) Dana also enumerates Mountain’s crimes and failings. He rejects the enslaved man’s statement of innocence and unequivocally states the legal necessity for capital punishment. Dana’s The Intent of Capital Punishment and Mountain’s Sketches are extensively referenced in scholarship concerning African Americans within the criminal justice system of the early Republic. Provenance [half-title]: “Josiah Chandler his Book. December 21st, 1790”. Various Chandler and Dana families of Connecticut and Massachusetts intermarried in the eighteenth century. Evans 22446. Sabin 51189. Trumbull 549. (Inventory #: 5643)
$5,500.00 add to cart Available from
Stuart Lutz, Historic Documents, Inc.
Share this item