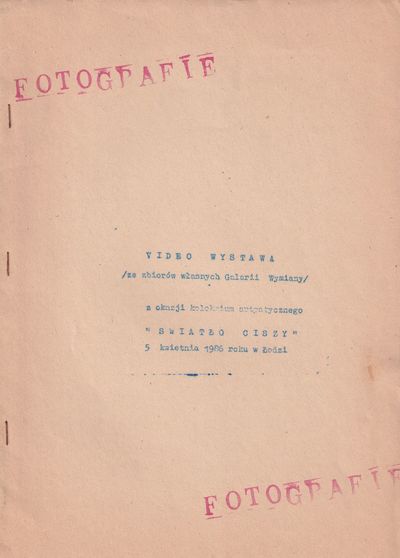 by Robakowski, Józef and Exchange Gallery
Łodz: [Exchange Gallery], 1986. Large octavo (29.3 × 20.5 cm). Original side-stapled wrappers printed in red and blue (typescript and rubber stamp), with three unnumbered leaves of copied typescript to rectos only. Very good. A catalog for the video and photography exhibition held at the Exchange Gallery in Łodz in 1986. Founded in 1978 by the film and media artists Józef Robakowski (b. 1939) and Małgorzata Potocka (b. 1953) in their private apartment, the Exchange Gallery hosted events, and exhibitions but also collected art works, mail art, video and ephemera of performances, creating a library and archive of the Polish and international neo-avant-garde movement throughout the 1980s. The catalog includes an introductory essay, "Sztuka samoobrony" (The art of self-defense), by Robakowski, and a list of Polish and international artists in the Exchange collection including Andrzej Partum, Dick Higgins, Zbigniew Warpechowski, Len Lye, Natalia LL, Richard Nonas, Dora Murer, and Christo among many others. One of the founding members of the famous Workshop of Film Form (1970-1977), Robakowski was an active participant in the Łodz neo-avant-garde scene of the 1970s. In addition to the Workshop which was based at the Higher School of Film and Television, Łodz became home to numerous private galleries such as Adres, A4, Na Piętrze, 80x140, Ślad, most located in artists homes or studios. The Association of Culture Creators (STK: Stowarzyszenie Twórców Kultury) was also established locally as an alternative to the official Union of the Polish Artists, turning Łodz into a nexus of neo-avant-garde activity. Today the archive and library assembled at Exchange Gallery comprise one of the largest private collections of East European and international neo-avant-garde in the world. In 2016 the collection was given by Robakowski to the Museum of Modern Art in Warsaw for cataloging and display.


(click for more details about Rozhdenie Kino [The Birth of Cinema])