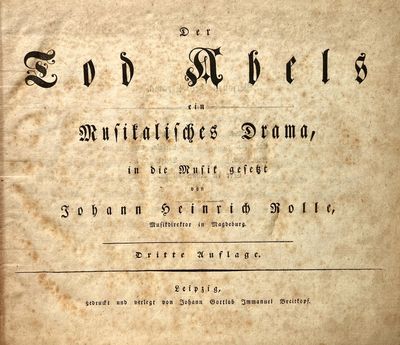 Rolle succeeded his father in the post of music director of the city of Magdeburg in 1751. There he founded the second series of public concerts in Germany (preceded only by the Gewandhaus in Leipzig).

Der Tod Abels, which takes as its subject Abel's murder by Cain, was first performed in Magdeburg in 1769.

"Rolle was virtually alone at this time in writing biblical-historical oratorios. Composed from 1766 to 1785, they became progressively more dramatic ... With his setting of Patzke's Tod Abels (1769), Rolle's reputation spread quickly throughout Germany and beyond. Each new work brought increased fame, and generated feverish local interest. He arranged 12 of his oratorios in keyboard reductions for publication by Breitkopf and Schwickert in Leipzig, whose printed lists of subscribers reveal a large, broadly based audience." Thomas Bauman, revised by Janet B. Pyatt in Grove Music Online. (Inventory #: 38239)
$425.00 add to cart or Buy Direct from
J. & J. Lubrano Music Antiquarians
Share this item