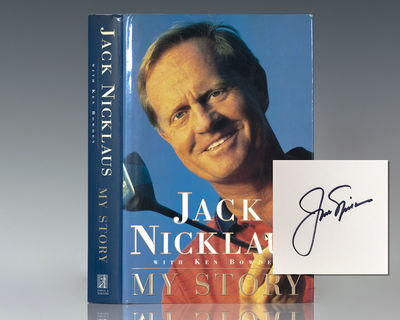 by Nicklaus, Jack; Ken Bowden
New York: Simon & Schuster, 1997. First edition of the Golden Bear's autobiography. Octavo, original half cloth. Boldly signed by Jack Nicklaus on the front free endpaper. Written with Ken Bowden. Fine in a fine dust jacket, illustrated. Dust jacket design by Paul Smith. As "The Golfer of the Century," Jack Nicklaus is a recognized authority on the game's history and direction, and in his 13th book, My Story, he shares the details of his most impressive victories. With 20 major championships under his belt, he has plenty of highlights to share, including shot-by-shot analyses of his classic battles with fellow legends Arnold Palmer, Gary Player, and Tom Watson. Indeed, Nicklaus seems to recall every shot of his illustrious career, and he is able to infuse his discussions of final round action with suspense, even though we've known the outcomes all these years. To this erudite study of golf the Golden Bear adds personal elements that reveal the man behind the one-iron. Nicklaus describes his business dealings--both successes and failures--his love of golf course design, the effects of celebrity status, and his childhood. (Inventory #: 133634)
$300.00 add to cart or Buy Direct from
Raptis Rare Books
Share this item

by Samuelson, Paul A

London : Victor Gollancz , 1961
(click for more details about Call For The Dead.)
View all from this seller>