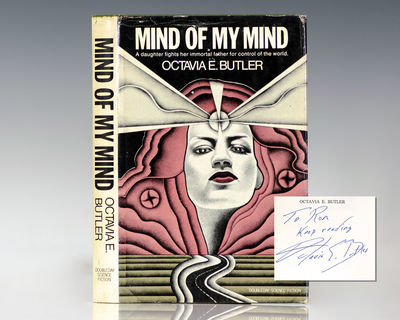 by Butler, Octavia E
Garden City: Doubleday & Company, Inc., 1977. First edition of Butler's second book; the chilling "pre-sequel" to Patternmaster. Octavo, original cloth. Presentation copy, inscribed by the author on the title page, "To Ron Keep Reading Octavia E. Butler." Near fine in a near fine dust jacket with a touch of shelfwear. Jacket design by Jan Esteves. The second novel in the Patternist series, Mind of My Mind recounts the story of how the Patternist society originated. Set in Forsyth, California in the 1970s, it is the story of Mary, a young, poor biracial woman who, after accessing her previously latent telepathic powers, must fight her immortal father Doro to preserve the lives of the Patternist community. Butler's first published novel, 1976's Patternmaster, was the first book in this series to appear. From 1977 until 1984, she published four more Patternist novels: Mind of My Mind (1977), Survivor (1978), Wild Seed (1980) and Clay's Ark (1984). (Inventory #: 134199)
$4,000.00 add to cart or Buy Direct from
Raptis Rare Books
Share this item

by Samuelson, Paul A

London : Victor Gollancz , 1961
(click for more details about Call For The Dead.)
View all from this seller>