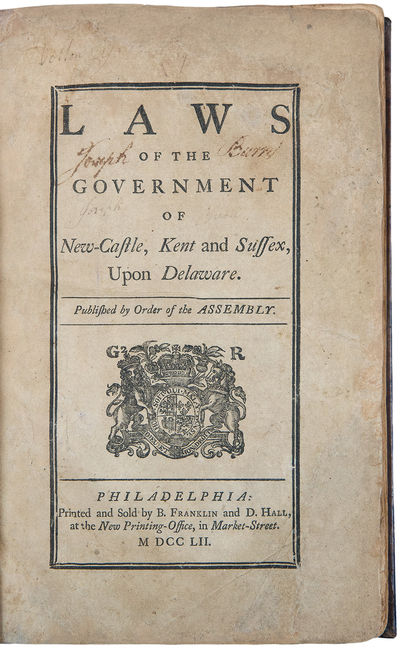 Compiled by Benjamin Chew, the present volume comprises the second collection the laws of Delaware, with over twice as many as were included in the 1741 edition. The tooling on the covers identifies the original binder as William Muir of Philadelphia (see Spawn's roll 28 in Appendix C of Miller). David Hall was an American printer who began working for Benjamin Franklin in Philadelphia in 1744. He became the foreman of Franklin's shop in 1746 and did all the editing and publishing of the Pennsylvania Gazette newspaper that Franklin started. In 1748, Franklin made Hall an official business partner on an eighteen-year contract, after which point the business became known as the Franklin and Hall firm. Franklin decided to retire and sold his share to Hall at the end of the contract, in 1766.