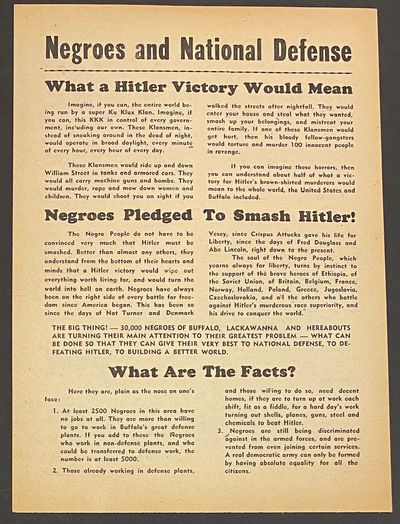 Buffalo, NY: 5th Ward Branch, Communist Party, 1941. Handbill. 8.5x11 inch handbill printed both sides, "Nov. 1941" written in pencil at bottom right corner of reverse, evenly toned, very good. Issued soon after Germany's invasion of the USSR and the US entry into the war, when the CPUSA changed course from its previous isolationism and argued that it was especially important for African Americans to join the anti-fascist front because of Nazi race prejudice. States that defense companies are refusing to hire unemployed Black men. "America cannot beat Hitler with one hand tied behind its back. (Inventory #: 283100)
$150.00 add to cart or Buy Direct from Bolerium Books
Share this item