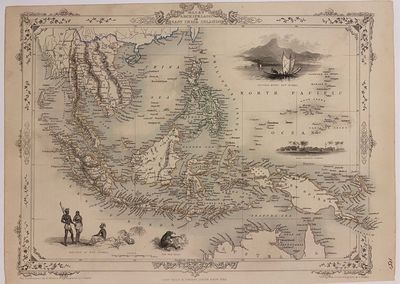 by TALLIS, John
London: Tallis, John, 1851. unbound. RAPKIN, John. Map. Steel engraving with early outline color. Sheet measures 10 1/2" x 14 1/2" This exceptional map of the Malay Peninsula, Southeast Asia and the the East Indies offers both geographical and cultural overviews. It covers from Birma or Burma (Myanmar) and the Andaman Islands eastward to New Guinea and includes the Philippines, Borneo, Sumatra, Java, the Celebes as well part of northern Australia and southern China and Taiwan (Formosa). Singapore is identified. The region is abundantly labeled with the names of cities, rivers, mountains, islands and ancient kingdoms. The decorative vignettes around the map amplify the cultural milieu perceived at the time. These include views of the Victoria Mount, New Guinea, Natives of New Guinea and a view near Sarawak, Borneo. An illustration of a Bee Bear is also included. The whole is surrounded by an ornate border. The map is from R. Montgomery's "Illustrated Atlas and Modern History of the World." It is in very good condition. Top margin slightly cropped by binder. No center fold or crease as is common with this map. John Tallis Jr. (1817-1876) was a London born bookseller who continued the prolific map publishing company started by his father. After a partnership with his brother, Tallis Jr. expanded the business to New York in 1849 as well as Boston, Cincinnati, Rochester, Philadelphia and Baltimore. He is remembered as one of the last decorative map makers, and this lovely map exemplifies his work. (Inventory #: 308376)
$300.00 add to cart or Buy Direct from
Argosy Book Store
Share this item

New York : NuJapple Marketing , 1986
(click for more details about Harlem U.S.A.)
View all from this seller>